Waters around the Anauroch desert

No eyes,[2]
Indistinguishable from water (when passive)[2]

Monstrous Compendium Fiend Folio Appendix
An aballin, also known as living water, was a fluid ooze[1] that resembled a clear puddle of water.[4]

While at first glance they resembled a pool of water or, if active, a small water elemental, their "bodies" actually comprised a weak acid. As they killed more creatures they would accumulate more and more indigestible metal items such as coins, buckles, or other effects.[4]

These animated liquids would entrap and drown any creatures they caught within their reach.[1] They would passively lay in wait in standing water, such as natural pools, subterranean lakes, and even fountains and attack when they sensed prey nearby. When they were ready to strike, the amorphous ooze would change their shape to a 10' (3 m) column of liquid and attempt to drown their target with pseudopodic appendages.[4]

When they were active, aballins were immune to elemental effects such as fire, cold, or electricity. In their passive state they had the same properties as water, and were susceptible to water-affecting spells.[4]

It was believed that the first aballin was created during the days of ancient Netheril, when a druid was cursed by a powerful archmage near his home by the Hale River. It was believed that all the aballin on Toril were descended from this long-dead druid.[4]

In Northwest Faerûn, some were known to dwell within the Mere of Dead Men.[5] They were more often found in Faerûn around the waters around the Anauroch desert, such as the Tesh and Ashaba rivers that flowed east from the Desertsmouth Mountains.[4] In the Unapproachable East, aballins could be found in Lake Ashane and in the Umber Marshes.[6] 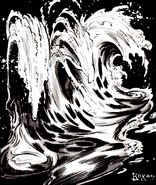 An aballin as featured in Monstrous Compendium Fiend Folio Appendix.

Adventures
The Runes of Chaos