Carnivorous
Abyssal chickens were small fiends native to the Abyss.[2]
“
The creature I seek is legendary, my friends. A fiend that few have seen, and which fewer still have survived. An unclean scourge never meant for this world! The abyssal chicken!
”
— Volo[3]

Abyssal chickens were small creatures. They had leather wings but were not capable of sustained flight. Their wings were folded above them, giving them a tear-shaped appearance. They had a large mouth filled with fangs and a long tongue. Abyssal chickens' primary form of locomotion was their two large legs, which ended in feet resembling those of a regular chicken. Each foot had three large claws.[1]

Abyssal chickens used their claws and fangs to defend themselves or attack prey.[1] They were fast runners and used their wings to increase their speed.[1]

“
I'll never forget the first time I saw an Abyssal chicken... Having captured one despite its swift and cantankerous nature, I managed to soothe it with some salt pork, finding that it tolerated being held and even enjoyed scratches on its meaty body. Yet its docility was short-lived, and within moments it reverted back to its demonic nature and sought to devour my tiefling guide.
”
— Volo[4]

Native to the Abyss, abyssal chickens were also found on Avernus. They were spawned fully-grown in the Spawning Trees. The trees held fleshy sacks on their branches, and when mature they fell to the ground, breaking open.[2]

Abyssal chickens were hunted and used as a food item. Their flesh had a taste identical to that of a fatty chicken. They were sometimes used as familiars.[2] 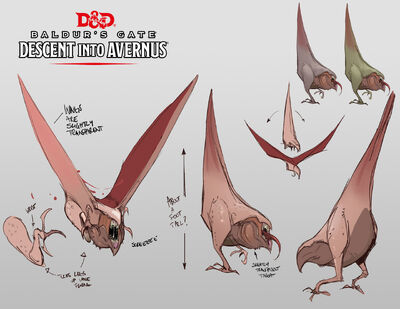 Concept art for the abyssal chicken by Max Dunbar