listen or: /ɑːˈsɛərɑːk/ ah-SAIR-ak[8]) was a powerful lich or demilich who was known and feared by many in the multiverse.[2] He visited Toril in the late 1480s DR to place an artifact of his creation called the Soulmonger in the Tomb of the Nine Gods, causing the onset of the death curse.[2]
“
I, Acererak the Eternal, beckon you to your doom. Come foolish ones, plunder my treasures, if you dare! Others have tried. All have failed! From your skin, tapestries shall be woven, and your bones will carpet my tomb. Only I am beyond death's reach. Only I know the secret to true immortality!
”
— The epitaph of Acererak, demilich[9]

Acererak traveled through the multiverse in search of artifacts, which he liked to lock away in trap-ridden dungeons to watch adventurers suffer and die. He then enjoyed trapping their souls in his phylactery, whose location was unknown.[2]

Although having had the power and opportunities to ascend to godhood, Acererak had no interest in being worshiped, despite having his share of followers whose suffering he enjoyed watching.[2]

Much of Acererak's past history was forgotten. It was believed that he was originally from Oerth.[2]

As he worked to achieve lichdom Acererak constructed a number of dungeons and tombs in order to draw out, defeat, and claim for his phylactery the souls of adventurers that sought to destroy him.[10] One particular dungeon hidden within a hillside, known as the Tomb of Horrors, would go on to claim the lives of thousands of adventurers. It would also attract the attention of many necromancers, who would go on to construct a settlement around the hillside to worship Acererak.[11]

At some point, Acererak gave a mirror of life trapping to Malcanthet, who promised to fill it with trapped souls and return it to his tomb.[12]

At some point in the 15th century DR, Acererak went to Chult and defeated the Nine Trickster Gods of Omu. He then enslaved the Omuans and forced them to build the Tomb of the Nine Gods. Acererak killed all the Omuans after the tomb was completed, and buried them alongside their gods.[13]

At some unknown time not long before the late 1480s DR, Acererak traveled to the Negative Energy plane and found an atropal there, which he decided to nourish to godhood. For that purpose, he built a powerful artifact called the Soulmonger and placed it in one of the tombs he possessed, the Tomb of the Nine Gods. The tomb served as the atropal's nursery while the artifact nourished it by trapping the souls of the dead and draining the souls of those who had been beneficiaries of resurrection magic. This was known as the death curse.[2] Not much else is known until he built his famous tomb of horrors.

“
In retrospect, I might have gone a little overboard. The best traps make their prisoners suffer and scream. Adventurers who visit my tomb die too quickly.
”
— The epitaph of Acererak, demilich[14]

The depiction of Acererak the Eternal from Adventures in the Forgotten Realms. 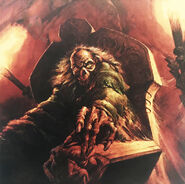 The depiction of Acererak the Eternal from Spellfire: Master the Magic.

List of Greyhawk characters#Acererak article at Wikipedia, The Free Encyclopedia.