Forgotten Realms Wiki
Register
Don't have an account?
Sign In
Advertisement
in: Articles in need of citations, Metals, Magical substances

It was found only in veins of ore near earth nodes and areas of faerzress in the Underdark.[citation needed] Occasionally, small meteorites consisting of some adamantine would fall to Abeir-Toril as well.[4][1]

Adamantine, when smelted, was ultra-hard but this was a costly procedure.[1] Adamantine weapons were useful for damaging the weapons and armor of opponents. A set of adamantine armor or a shield was nearly impenetrable to normal weapons.[citation needed]

Adamantine was often used by drow elves of the Underdark, and their adamantine weapons were usually swords that were magically enhanced. Their magical strength and sharpness faded if brought into contact with direct sunlight.[citation needed]

The githzerai used their knowledge of Limbo to bring a shard of it when they traveled to the Prime Material plane. A group of anarchs then molded that essence of Limbo into large adamantine citadels that served as remote bases from which to observe enemies or to launch attacks.[5]

Adamantine was extremely difficult to produce, requiring high forging temperatures and a very delicate procedure. As an alloy, it was composed of five parts adamant, two parts silver, and one part electrum. Most smiths that specialized in producing adamantine were dwarves,[2] particularly those from the ancient kingdom of Ammarindar.[6]

It was also possible to produce adamantine as an alloy of mithral and steel through the application of several magical procedures, although the process to do so was exceedingly complex.[2]

Natural adamantine was mined in the following places in the Realms: 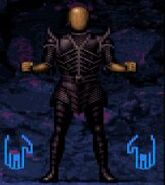 A suit of drow adamantine armor.[8]

A slab of adamantine metal.