An adventurer was someone who took risks in the pursuit of a goal. Adventurers came from all races, and they could be found almost anywhere.[1]

“
How do all adventurers die? Fell monsters hunt them. Ruthless bandits slaughter them. Evil wizards turn them to dust...
”
— Dorath Wyvernspur[2]

Some individuals became adventurers for fame, others for money. Some sought revenge, while others laid down their lives in defense of their lieges, their families, their beliefs, or the land itself.[3] As most lands were perilous and full of brigands and monsters, most people started their careers as adventurers by dealing with these dangers to their hometowns.[4]

The rulers of Faerûn and other lands knew that some adventurers had made their lands better places to live, and so tolerated or even encouraged their existence, even if some individual adventurers were of evil bend. Adventurers were highly capable individuals, so even kings were careful to not earn their ire.[3] However, that didn't mean that adventurers were untouchable or that all nobles feared them. In fact, most nobles only tolerated them because they worked for less payment than professional mercenaries and in most cases were easy to manipulate.[4]

Places such as Cormyr, the Dales, the Western Heartlands, and the North in Faerûn,[5] or the Windrise Ports in Laerakond,[6] were very accepting of adventurers of good heart, knowing that such individuals risked their lives to face dangers common folk would never face themselves.[5]

Not all adventurers were renowned enough or highly capable individuals to deal with monsters or villains, and as such most adventurers (usually those starting their careers) had to accept not so-successful jobs to earn for a living. Such jobs included being hired as bodyguards, caravan guards, and/or "drawn-dagger" agents (the polite term for a spy, hired killer, or outside-the-law facilitator, usually for a wealthy patron or a guild).[7] Adventurers were often hired to act as the "extended arms" of those who wanted to go against the law, tasking them with missions a pact or continued good relations constrained them from doing. This was a common practice among the nobles from Waterdeep.[8]

During the 14th century DR, it was fashionable among nobles to hire adventurers to do their dirty work so they could portray themselves as loyal to the throne and too civilized to threaten social order and etiquette by getting personally involved in disputes. In the late years of the 15th century, it became fashionable among wealthy merchants to hire adventurers to show others that they were practically nobility in all but in name.[9]

“
Adventuring! A fine and glorious pastime that passes time like no other! To seek the rights and lows of the depths and heights; to follow in the footsteps leading down paths never trod upon; to plumb the furthest reaches of oneself while exploring the very world just outside your door. Such a life is a grand one indeed, though simple in its complexity!
”
— Reginald "Longtooth" Worthington III[10]

An alternative for adventurers looking for making a name for themselves was to work as bounty hunters, dealing with bandits, wanted criminals and adventurers declared outlaws by local authorities. Bounty hunters always attempted to bring back criminals or stolen property to the authorities and the wronged people, or at least eliminate the outlaws and so "repay the debt in blood before the gods."[11]

Although initially people mistrusted bounty hunters, this public attitude toward them began to change in 1400 DR, when the Lords of Waterdeep issued a decree known as the Tarnsmoke Proclamation, by which it became legal in Waterdeep and its patrolled environs to hire bounty hunters (most of them usually adventurers) to go after wanted outlaws. This practice became very popular over the next decade, and by 1480 DR it was legal in most places along the Sword Coast, though frowned upon by many faiths.[11]

Many ambitious adventurers usually set themselves up as nobility by conquering a region and declaring it a realm. This was something common in places like the Border Kingdoms. This was the usual sort of way that adventurers become noble, aside from marrying someone from nobility. This was a dangerous course of action, however, as many of those would-be nobles usually ended up dead, killed by legitimate nobles who wanted them out of the way (usually, their spouses).[12]

Adventurers were usually hired to fulfill certain "odd jobs". Such odd jobs included grave-digging (or grave-robbing), animal training and monster capturing, working in sewers (a popular unpleasant yet well-paid job in places like Waterdeep,[7] and in Neverwinter after 1485 DR[13]), and stonemasonry concerned with fortifications and manors (such as repairs, painting and decoration, among other similar activities). In places such as Cormyr and Amn, government agents also paid adventurers to dispose off of garbage, dung and other disposable stuff.[7]

Another lesser-known line of work that was popular among adventurers was to sell their services as scribes that posed as their patrons, writing on their behalf and keeping both the writing task and the contents of what was written utterly secret. Such adventurers were hired to write love letters, job applications, and delicate apologies on behalf of wealthy patrons. Bards and nobles liked to hire such adventurers to compose jokes, speeches and songs they could later claim as their own.[7]

A variant on this kind of work (believed to have been originated in Cormyr) was to write "heartwarms" (flowery romance) and "lust tales" (mature-rated tales), intended for the eyes of the patron only and sometimes written to order, using real individuals as characters.[7]

A few adventurers (usually those disabled by age or injury in ways that limited the professions they could undertake) became so desperate or uncaring enough as to went as far as to sell their own bodies to wizards and alchemists to be experimented upon.[14]

Adventuring bands could forge an interesting career as "finders and disposers" for archmages, a royal court, or wealthy individuals.[15] Some people hired adventuring bands, especially well-known and/or veteran bands, to find works of written word (such as books and scrolls), a job that in the Realms was very expensive,[16] while followers of Mystra usually used such bands to "uncover" the magic items they had left behind in ruins, caves and other such places, following the edicts of their goddess.[15]

Few adventurers survived to see old age, because of the risks of their profession as well as for some of them it was like an unspoken tradition to chose to not reach to such an age. Adventurers who respected this traditions usually went to dangerous places searching for an heroic death or started random fights they knew they could not win.[14]

Those few adventurers that survived to see retirement usually sold their services training younger adventurers or giving them advise and information (such as old maps and rumors about places with potential treasure). Such adventurers also frequented taverns to tell their stories, usually for a fee. Others retained enough skill to become expert weapon sharpeners, or spies for rulers or certain organizations.[14]

Adventuring as a profession began to rise around 1300 DR, as prosperity levels in the Realms began to increase with the founding of new cities and the creation of merchant powers. Before that, adventurers were regarded as lawless nuisances little better than outlaws, an attitude encouraged by rulers and many temples, who disliked competition to their "lawful authority."[18]

However, with the rise of guilds and the accompanying reform to rules, regulations, and edicts in the early 14th century, something that made agents outside of the law a necessity for people that wanted thwart their competition while protecting themselves and their investments; as well as the rise of factors, who needed able protection without endangering the reputation of their homelands, adventurers became widely accepted by merchants, nobles, wealthy individuals, and those in need of agents that would dare to act outside of the law across the Realms.[18]

Adventurers are the player characters of any person playing a D&D campaign.[1] 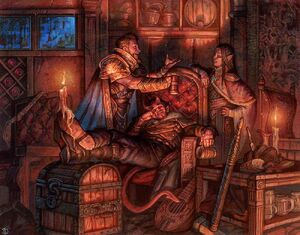 A group of adventurers enjoying a long rest as depicted in Adventures in the Forgotten Realms, by Chris Seaman.