Start a Wiki
This article is about the creature. For the spell, see Aerial servant (spell).

An aerial servant was a form of air elemental native to the Elemental Plane of Air.[1]

Aerial servants appeared to be invisible on their home planes. They resembled the upper halves of humanoids made of sparking blue vapor. Their white and blue smoky bodies had only slits for facial features, and ethereal hands with stretched-out fingers.[1]

They could be summoned to the Prime Material plane by a powerful cleric via the aerial servant spell, where they would appear almost invisible. However, clerics must be careful and cast protection from evil beforehand, in order to avoid initiating combat with the semi-intelligent elementals, as they resented being summoned. After a successful summon, the beings would complete any task for their conjurers, unless prevented from doing so. If they were prevented, aerial servants would go insane, striking out at their masters.[1]

Possessing ultra-high speed and strength, they could carry weights in excess of 10,000 gp, and at move twice the speed of an invisible stalker.[2]

Aerial servants spent time soaring through their native planes, revealing their infinite mysteries. As well as not keeping company, they didn't keep lairs or specific territories. The cyclones, wind storms, hurricanes, and maelstroms of the Elemental Plane of Air generally did not pose a threat to them, and so they were often found in these areas. Very calm weather would cause these creatures to grow lifeless and weak.[2]

Although they generally preferred to avoid combat on their home planes, when summoned to another, they fought using their supernatural strength. They attacked by strangling opponents with their extended fingers, suffocating them and causing them to take damage. Only exceptionally strong opponents could break free of the grasp of such air elemental kin. When invisible, aerial servants surprised opponents and were incredibly quick,[3] making it far harder to land an attack.[1]

They could only be hit by magic weapons.[3]

These elemental kin did not form families or communities, but only appeared to wander alone. They didn't often associate with other creatures, though had a natural affinity for air elementals.[2]

Aerial servants could only reproduce in areas of extreme weather, where they were drawn to. Whilst engaged in such a storm, there was a chance that the servant would be blown with such force that it would create another of its kind. This process was awfully painful, and the servants strove to avoid it.[1]

They fed on the planar wind of their home planes, which constituted their life force. These elementals had to be nourished in such a way at least monthly, or they took a hit to their health.[1] 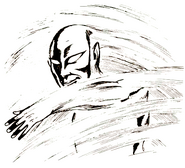 Aerial servant from the Monstrous Compendium Volume One.

Image of the creature from the Eye of the Beholder II: The Legend of Darkmoon video game.
Add a photo to this gallery

Retrieved from "https://forgottenrealms.fandom.com/wiki/Aerial_servant?oldid=515359"
Community content is available under CC-BY-SA unless otherwise noted.