MS Dos or Windows 2.x/3.x
Al-Qadim: The Genie's Curse is a game for MS-DOS and was published in 1994 by Strategic Simulations, Inc.. It followed the rules of the 2nd Edition of AD&D. It is not a typical roleplay game of that era, but more like a single-player action role-playing game. The story takes place in Zakhara.
“
As the youngest son of a Noble Merchant, an easy life lay before you. But the call of adventure beckoned, and so, you left your home for a life of action and danger. Sea serpents, storms and tattered sails have all proved perilous as the years passed. You've taken ships and defeated fiends, at the side of your instructor, the Master Corsair Sinbar.

But your thoughts always return to Kara, the Caliph's beautiful daughter. It is for her you devote your skill and honors. And it will be her hand in marriage that will be your reward for attaining your goal of becoming a Corsair. Your adventure begins now, on the hidden isle where Sinbar tests his pupils.

Al-Qadim: The Genie's Curse is an action role-playing game set in the Al-Qadim campaign of the Advanced Dungeons & Dragons pen-and-paper RPG. The gameplay alternates between visiting friendly areas, where the hero can talk to characters (including choices of dialogue lines and moral behavior), and exploring dungeons, where enemies must be fought in action-based combat. The hero can use melee weapons, a slingshot for ranged attacks, or cast magic spells. Experience points are awarded for defeating enemies; the player can raise the statistics of the protagonist should he gain a level. Acquiring special items and training may also permanently increase certain attack parameters.
”

The player character was a member of Al-Hazrad family, one of the two ruling families of the town of Zaratan. After his training as a warrior the player returned home and became a part of the feud between both families. A treaty with the Wassabs should have been signed but after that things got worse.[1][2]

The ship with the princess, the lover of the player, and her father was destroyed by a genie. It seemed that the genie of the family had its hands in destroying the ship. That started the quest of the player to clear the honor of his family and try to rescue his bride.[2]

Unlike the games in SSI's Gold Box series, character generation is greatly simplified. The player chooses a name, by which they are known throughout the game. There is no race, class or skill selection, and play begins immediately. The single-player character begins the game as a second-level corsair, whose statistics are predetermined[1]; the player cannot upgrade the character's weapons and armor. The character earns experience points by solving puzzles and finishing quests, some of which do not involve combat.[2] The character gains levels in exchange for experience points; gaining levels increases hit points, and grants the opportunity to learn new skills for combat.[1]

The game features a simple interface, with icon menus instead of text.[1] Character movement and most object manipulation are mouse-directed, although the player may use a keyboard or joystick. The player chooses all actions (except movement and projectile weapons) by pressing a single action key (or mouse button), which causes the character to automatically take the correct action with an object; the character either automatically picks up important objects or can take the object when the character looks at it. To talk to characters, or attack monsters with the scimitar, the player moves the character towards the target and clicks.[1]

The player selects the game's difficulty level of the game, which affects the monsters' power. At the beginning of the game, the player learns to maneuver the character by racing through a trap-filled dungeon hallway. Al-Qadim features simple, real-time combat, with the character using up to two weapons at a time. The character's scimitar can become more powerful with special objects, and his projectile weapon is a sling or magic shards which cast spells. If the character is injured, he can restore his hit points by drinking healing potions or be magically healed when he visits special locations.[1]

The game places less emphasis on role-playing game elements (such as exploration, combat and magic), favoring adventure-game elements (such as problem-solving and object manipulation) and featuring a smaller world to explore.[2] Travel is shown overhead, using ships and flying carpets.[1] The character is visible in three-quarter view, but they and the monsters are shown in side view when moving. In many areas, travel is one-directional. Conversations appear as text, and the player chooses sentences (or phrases) by clicking on them. The game features puzzles and mazes important to plot advancement.[1]

For the MMORPG Dark Sun Online: Crimson Sands the developer used images from Al-Qadim to finish the title on time despite a low development budget.[3] 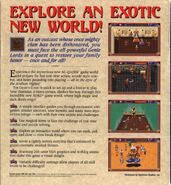 Back cover of the DOS edition.