Alaron was an island in the Moonshae Isles. Although not the largest of the Moonshae Isles, it was considered the most powerful prior to the Spellplague. In the 14th century DR, the Isles were collectively ruled from the capital city of Caer Callidyrr by High Queen Alicia Kendrick. By 1479 DR, the acting ruler of Alaron was a descendant of Alicia, Derid Kendrick.[citation needed]

While the capital was a port on the eastern side of Alaron,[2] the castle from which the Kendrick family ruled was actually built by the first High King of Moonshae, Cymrych Hugh.[3]

Alaron was House Kendrick's last bastion of a once great empire among the Isles.[citation needed]

Caer Callidyrr
This city on the northern edge of Dernall Forest was the home of High King Derid.[4]
Dernall Forest
This forest teemed with goblins and evil fey. Druids loyal to King Derid waged war with the humanoids.[4]
Fairheight Mountains
This mountain range separated the traditional lands of the Northlanders and the Ffolk, who lived in the lowlands of the island. The mountains were home to the dwarven clans Rustfire and Rookoath, who were at war with the dark fey and a shadow dragon.[4]
Kythyss
This small city of fishermen and woodcutters was a hotbed of intrigue. When the High King was unable to protect the residents they hired mercenaries. The mercenaries were in league with Amn and, as of 1479 DR, the Amnians had effective control over the city.[4] 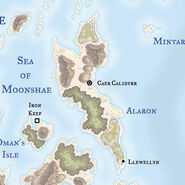 Alaron on the 3rd-edition campaign setting map.
Add a photo to this gallery

Retrieved from "https://forgottenrealms.fandom.com/wiki/Alaron?oldid=566826"
Community content is available under CC-BY-SA unless otherwise noted.