22 (as of 1372 DR)
House Amcathra (pronounced: /ɑːmˈkɑːθrɑː/ am-CATH-ra[2]) was a distinguished Waterdhavian noble house that had a long history within the city, dating back to the 12th century DR.[3][1] They were particularly well known for their trade in wine and their enterprises in sword-forging, horse-breeding and martial training.[4] Their members were active patrons within the Vintners', Distillers', & Brewers' Guild as well as the Splendid Order of Armorers, Locksmiths, and Finesmiths.[3]

The blades produced by House Amcathra were known to be some of the finest found in the City of Splendors, the reputation of which preceded that of the family.[3]

The family owned a villa in the North Ward, between the east side of the High Road and Ilzantil Street and between Hassantyr's Street and Tarnath Street.[5][6]

The family's history dated back to Rorgar Amcathra, who established a horse ranch near Rowan Hold, shortly after the First Trollwar. They offered their services as horse-masters to the military of Waterdeep, whose cavalry were greatly depleted during the conflict, and rapidly garnered a fair amount of wealth. In 1248 DR, Lord Hargrym accepted the city's offer of ennoblement, along with several other mercantile families, which ascended their status to that of Waterdhavian aristocracy.[3]

Around 1372 DR, House Gralhund began to undercut the sale of Amcathran blades, offering weapons that were forged from mithral-laced-steel was provided from the duergar Clan Xundorn, which was highly superior in form and function. Lord Arilos suspected they were using an alloy that was unavailable to other smiths, and sought to hire adventurers to rout out the driving force behind their recent success or hopefully attain the source for his own family's use. 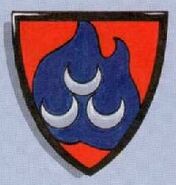