Green[3]
Amnizu (pronounced: /ɑːmˈnitsʌ/ ahm-NEE-tsu[7]), also known as styx devils,[6] were powerful baatezu primarily responsible for protecting the River Styx within the circle of Hell known as Stygia.[5] Like the sinister depths of the Styx itself, they could drain the memories of those that they touched to induce amnesia.[4] Amnizu were counted among the caste of greater devils.[4][6][7][8][9][10][11][12][13]
“
Amnizu are called the Keepers of the Styx; they’re immune to its draining effect. They guard Stygia, the fifth layer of Baator, against invasion (tanar’ric and otherwise). Though the fiends fulfill their duties admirably, amnizu are notoriously treacherous.
”
— The mortal mage Nomoto Sinh[9]

Amnizus were green, gruesome humanoids with short, squat bodies and stubby limbs.[3] They usually stood between 4‒5 ft (1.2‒1.5 m) tall and weighed 200 lb (91 kg), although older amnizu could grow past 10 ft (3 m) tall and could weigh over 700 lb (320 kg).[4][3] Sprouting from their backs was a pair of large, leathery wings colored black but with a silver trim.[4][6] Their bald heads were disproportionately large and elongated compared to the rest of their bodies, hosting porcine eyes, a pug-nose, and a mouth full of jagged teeth. As amnizus grew older they began to further dress their corpulent forms in the robes of office.[4][3]

Amnizu had a deep-seated loathing not only for foreigners but even the native inhabitants of the Nine Hells, viewing all others as nothing but tools to be utilized or a form of currency.[3][5] They were ruthless and tyrannical baatezu whose high position caused them to take on an aloof attitude in regards to lesser devils, a disinterest that frequently reached the point of callous disregard.[1][3] This feeling of superiority was fostered by Levistus, who encouraged his trusted chancellors to view themselves as above Hell's rules.[14]

On the other hand, amnizus abhorred being inferior to others, whether in terms of personal station or ability.[3] Rather than obeying commands due to an inherently lawful disposition, they followed their superiors in order to advance or avoid punishment by the pit fiends.[5] The pit fiends were not exempt from the constant schemes and undermining machinations of the amnizus, convinced as they were that they were the only devils truly fit to rule Hell.[15] Even as an amnizu feigned servility, they persistently plotted to eliminate their rivals and superiors, either through attempting to discredit their foes with complex political maneuvers or more direct means, such as hiring an assassin.[3]

While notorious for their diabolical nature and constant conspiracies, styx devils were admirable in their ability to complete their duties and unfailingly completed their wicked agendas within the limits of the law.[3][9] Despite their great intelligence, amnizus were often hoist by their own enormous egos when clever enemies pandered to their pride. If not working or scheming they recklessly indulged in the pleasures and luxuries of the Nine Hells.[3]

The touch of an amnizu was incredibly dangerous as it channeled harmful energy into their enemies that only magical protection could impede.[4] Their touch degraded not only the body but the mind, draining targets of their intellects and memories like the Styx itself.[3] Conversely, their connection to the Styx also made them immune to its harmful effects, an immunity that carried over into anything that would reduce their mental capacity.[3][9] Magical, silver, and holy weapons were among the few things that could properly hurt them, outside of acid or good-aligned spells and abilities.[3][6] In order to banish an amnizu back to Stygia a holy word had to be uttered.[4]

Due to their role as protectors styx devils were also given access to powerful imprisonment magic with which to seal away dangerous opponents, although they could only make use of it once per day.[4] Amnizus also had an array of powerful and innate, mental magic, letting them dominate and destroy the minds of their opponents.[1] They were also capable of hurling dangerously fast fireballs at their foes as a means of causing more direct harm.[3] If in danger, amnizus could call upon a wide variety of devils for aid, including abishai, advespas, barbazus, erinyes, hamatula or another amnizu with varying degrees of success.[3][4][16]

Due to their own perceived nobility as greater baatezu, amnizus preferred to leave combat to their minions rather than engage attackers themselves.[4] Even when pressed into battle, styx devils favored having a large force of advespas, barbazus, or similarly inferior underlings as a wall between them and their opponents. An amnizu's primary objective was the capture of their foes and so they launched a flurry of fireballs at larger opponents to weaken them as their troops dealt with smaller threats. Once their foes were sufficiently drained an amnizu would attempt to use their mind-draining touch to disable and detain their defeated enemies. If such tactics were not possible, an amnizu's next gambit was to attempt to swoop down at melee opponents and mentally incapacitate them with their touch.[3][16]

Amnizus were the baatezu that most frequently studied magic as wizards, often specializing in water magic. The psuedo-elementals they conjured from the foul waters of the Styx were greatly feared.[17]

“
No matter how high you rise, there's always someone or something higher.
”
— The "lesson" an amnizu needed to learn for "promotion".[9]

Stygia hosted the greatest population of amnizu, with a majority of them residing within the City of Ice, otherwise known as Tantlin.[3] Amnizu were sometimes called the Keepers of the Styx, since despite serving other functions within the Nine Hells, their primary purpose was to defend the River of Blood. The Styx was a weak point in Hell's defenses since it ran through both Stygia and Avernus, and thus allowed mortal crusaders and tanar'ri hordes access to Hell from other points within the Lower Planes.[5][9] While amnizus were technically responsible for keeping invaders out of the Nine Hells, their true task was not so much preventing such beings from entering but to ensure that they never escaped.[5][16]

Along every ten miles of the Styx were checkpoints at which every visitor to Hell had to register. Such checkpoints normally consisted of a watchtower from which white abishai guards could fly in and out of to identify travelers and a processing center where most amnizus dwelt in. Processing centers were grim, odorous places with labyrinthine corridors at the end of which were inquiring amnizu in charge of discerning the motivation, possessions and intended staying time of foreigners. After humiliating strip searches conducted by their guards, travelers were required to pay an entrance fee somewhere below 500 gold pieces worth of coins, magical items or gemstones. Any attempts to break through the bureaucratic net were met by a swiftly organized troupe of hunters that would relentlessly scour the Nine Hells for the rebellious fugitives. Targets would be hunted regardless of boundaries not only for the interrogatory torture an amnizu would be allowed to conduct on prisoners before handing them over to kytons, but for the fame and recognition that came with the deed.[3]

The second function of the styx devils was to serve as generals for the infernal legions. Rather than occupying checkpoints along the Styx, some amnizus watched the river from fortresses along its bank from where it flowed through Dis and Stygia. Lemures that arrived to Hell through the Styx, having no personality, memories, or desires outside of taking revenge on reality, had to have the rules of Baator drilled into them by amnizu sergeants before they were marshalled into armies.[1] The protection of Stygia depended on amnizu generals, each of which were given an army composed of thousands of abishai and erinyes, although nothing prevented them from using such forces for their own gain.[5] Regardless of personal standing, most amnizu had at least one squadron of advespas at their disposal and a group of barbazus as bodyguards, although they were more fond of having war devils as protectors due to their slightly higher intelligence.[16][18]

Amnizus made up the majority of the leaders in the Second Command, the division of the devil legions that specialized in warfare at sea. Their natural resistance to the Styx and greater experience with it made them perfect for the job of protecting and attacking using the wicked waterway. The admirals of the navies often stocked their vessels with an intoxicating flower known as "desert's night", a blossom found in Set's stygian realm that could undo the memory loss effects of the Styx.[19]

Although amnizu mainly watched over the Styx, they were not only its guardians, but the guardians of all gates to Baator and the traffic between them. Their missions often took them to the upper layers of Hell, and individuals were often put in charge of managing portals and planar touchstones throughout Baator.[3][5] Because they protected the portals to the Nine Hells they could be seen more frequently than other devils within mortal realms, occasionally touring the Material Plane to conduct devastating genocides.[3][6]

As greater baatezu, amnizus were a part of the ruling class within Baator, existing as a kind of nobility somewhere below pit fiend status.[5] As the administrators and politicians of the Nine Hells, they spent a large amount of their time plotting on how to ascend their hierarchy whether through collecting the prestige that came with the capture of fugitives or brokering deals with sinister forces. They acted within the shadows to secure souls from night hags or occasionally made alliances with mortals to defeat rivals protected by the law. Their personal treasures, if not spent of luxuries, were invested into potions and magical items.[3]

While it was commonly known that devils of higher status were more closely observed by the enigmatic Dark Eight, amnizu often ordered their minions to destroy the servants of the Dark Eight. It was said that amnizu might even attempt to betray pit fiends if it could be done in secret, such was their desire to scale the hierarchy.[5] Their tactical insight and adherence to the rules of Hell were great enough that the styx devils still held value to the archdevils despite their frequent treachery.[1]

Their traitorous deeds to rise were potentially done to gain the respect given to pit fiends, or to simply grow beyond the task of guardian, as attempting to rise to a higher rank from of devil was inevitably difficult. Despite being greater baatezu, the rank of amnizu was ultimately unfavorable to any devil desiring to reach the top of Hell's hierarchy. Like nupperibos, the only way to proceed further was to undergo transformation into cornugons, beings thought to be of lower status.[9]

To become an amnizu, an osyluth would have to undergo a painful promotion process where their limbs would be torn off to reveal stubby ones and their faces removed. The ritual was administered by other bone devils who would leave the subject's to peel off the leftover caul from their face, or otherwise die before the promotion was finished.[20] 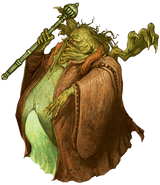