Anadjiin,[2] halflings, plainsjan,[3] umber hulks, beasts[1]
Anadia was the first planet from the Sun in Realmspace.[1] Seen from Toril, it looked like a small amber-colored orb with green poles which never appeared too far from the Sun. Anadia and Coliar, the two inferior planets of the Torilian solar system, were known as the Dawn Heralds.[4]

Due to its proximity to the Sun, most of Anadia's surface was too hot and dry to support humanoid life. The equatorial regions, which spanned 70% of the total surface area of the planet, were wastelands marked by enormous canyons which were inhabited mainly by umber hulks and other bestial life forms unique to the planet.[1]

The north and south polar regions, however, supported a warm and humid climate that was favorable for humanoid life. These regions, where the halfling populations of the planet dwelt, were marked by rolling verdant hills that grew richer and denser in vegetation the closer one moved toward the poles. The central polar regions were also more mountainous, with the highest mountains being even snow-capped, from which sprung rivers that flowed toward the pastoral outer polar fields into lakes and freshwater seas. That water never went too far out of these regions, evaporating quickly before reaching the torrid tropical zones.[1]

There were two unique species of plants on Anadia: the poisonous powderpuff, which could be used to produce smokepowder; and the edible but not very nutritious crispyleaf, which could be employed as a gastric painkiller.[1]

The only region of Anadia that had a stable government was its north pole. It was ruled by a constitutional government, which divided the region into thirteen counties, each of them with their set of governing laws. Four of these counties were friendly towards spelljammer ships, while the remaining nine had implemented defense systems to shoot them on sight, out of fear of contamination from alien diseases.[1]

The Northern Polarate had a steady trade with off-world ships. They exported a large selection of meat and plant products grown by the halflings, as well as the occasional "lesser" humanoid from their reserves. In exchange, they imported large quantities of weapons and magic items, which they used to defend against raids from the equatorial umber hulks and off-world neogis.[1]

Sometime in the mid-12th century DR, an infectious disease brought by a traveling crew killed 30% of the southern polar population. This incident prompted the extreme hostility of some of the northern counties against off-planet ships.[1]

By 1367 DR, the ruler of the Northern Polarate was Fjord Deepskull.[1]

The north polar region had six freshwater seas, all connected with each other through artificial channels that allowed fishing and trading boats to travel.[1]

Anadia was inhabited by a unique subrace of very intelligent halflings who were well-adapted to the warm and humid climates of the planet's polar regions. They had very dark skin and had adapted their eyesights to have a reduced sensitivity to sunlight, which made them perceive every other planet's illumination as continuous dusk or night.[1]

The halfling populations differed wildly from one pole to the other. The inhabitants of the more organized north pole were supremacists, viewing all other humanoid races as inferior. They kept other humanoid inhabitants confined in "idiot reserves" located on the edge of the equatorial wastelands in order to prevent them from being traded as slaves by the halflings.[1]

The south polar region was in constant chaos due to feuds between halfling families. There was no significant trade or fixed government. Spelljamming ships were attacked on sight, in the hopes of being captured in order to provide an advantage to one family against its rivals.[1]

The equatorial region was ruled by primitive umber hulk tribes. They were originally kept by neogi slavers who sought to sell them as slaves and to use them to capture the polar halfling populations. Lack of collaboration from the umber hulks led the neogi to abandon this plan and to leave Anadia. The abandoned umber hulks from those ranches became scavengers for food and water, while trying to defend themselves against the planet's native predators, the extremely intelligent and highly aggressive plainsjan and anadjiin.[1] 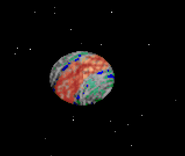 A depiction of Anadia from the Spelljammer: Pirates of Realmspace computer game.