Ankhapur was a city located in the Lake of Steam region on the southern edge of interior Faerûn.[1][2]

The city was primarily known for its pearl industry, which involved many of its citizens.[2] 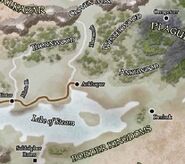 Retrieved from "https://forgottenrealms.fandom.com/wiki/Ankhapur?oldid=305242"
Community content is available under CC-BY-SA unless otherwise noted.