The araneas (sometimes called "werespiders") were a magical race of sentient, shape-changing spider-like creatures[4] inhabiting the Spider Swamp in Calimshan.[5] 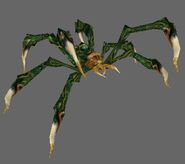 An aranea attacking a drow in Rothé Valley.
Add a photo to this gallery