listen), were greater yugoloths known for their covetousness of information and arcane power. The sly fiends were the record keepers of the yugoloths and scribes of Gehenna, managing transactions for services rendered in the Blood War.[1][3]
“
An arcanaloth. Loyal to neither side in the Blood War. Always making a deal with everyone. They are as slippery as a greased basilisk and just as deadly.
”
— The cambion Zaxarus[8]

Arcanaloths appeared as 6 ft (1.8 m) tall humanoids with the heads of fanged jackals or war dogs. Protruding out from the top of their skulls was a pair of ivory, whitish horns.[4] They kept themselves well groomed and dressed in immaculate robes, but often wore disgruntled expressions.[3] When conducting negotiations they took on the guise of other humanoids, replacing their hateful snarls with charming smiles.[1]

Arcanaloths were a relatively civilized breed of yugoloth, possessing both keen minds and silvered tongues.[9][3] They were business minded and somewhat surly, but were generally truthful and had expertise in manipulation and diplomacy. Their kind had earned a negative reputation for being adulating, avaricious and conniving in their dealings,[10][2] and it was true that they viewed all around them as stepping stone to reach the rank of ultroloth.[11]

Unlike most yugoloths, their greed manifested not as a thirst for wealth but a hunger for the power found in knowledge and information.[1] The easiest way to deal with them was to appeal to such greed, whether bluffing or being honest, hinting to them that one had access to esoteric knowledge without being too specific.[11]

The claws of an arcanaloth were poisonous and both their fangs and horns could be used in combat.[4] Mind-affecting spells did not work on them due to a combination of their sharp minds and enchanted nature although this did not extend to the use of their true name to force them to obey.[3][9][13] They could be harmed only by magical weapons of great enchantment, could magically fly at will and also attempt to summon small teams of mezzoloths, dhergoloths, or another arcanaloth to assist them.[3]

All arcanolths commonly memorized offensive spells but were smart enough to learn spells for defense and escape. They were extremely intelligent and used their spells to maximum effect but avoided hand-to-hand combat despite their poisonous claws.[3]

Within the feudal hierarchy of Gehenna, arcanaloths were responsible for commanding units of lesser yugoloths while keeping track of their contracts, records, and accounts.[9] Their schemes were not in service to their kind but meant to bolster their own power and reputations, dependent as they were on their careful judgement.[3]

Their role in the Blood War was casual but crucial, as they performed all negotiations between the tanar'ri and baatezu and conducted them with skill born from experience.[3] It fell to them to decide which legions would live another day and those who suffer at the front lines.[9] They employed tactics all the more devious for their transparency, such as openly discussing the offers made by a client's enemies in order to prompt them into outbidding their rivals.[3] Their ability to both speak and read all languages furthered their ability to forge contracts. They could douse the flames of discord and promote peace with the same grace with which they sparked wars. It was not simply the nature of a contract that they arbitered but also the costs of the services, although when it came to themselves they bartered in information and magical items rather than conventional rewards.[9][1]

Arcanaloths preferred to dwell within Gehenna, only leaving if needed and never for long, as they drew their power from its powerful furnaces.[3] They ruled from their respective baronies from red-iron fortresses scattered throughout the plane. The forts were occupied by small amount of lesser yugoloths that acted as its servants. While the larger keeps contained portals to other planes, with some rumored to reach into the Material Plane, they were warded by pentagrams and other magical protections.[4] Most of their kind dwelt within the Tower of the Arcanaloths located on Chamada, writing the contracts in the blood of some petitioners on the living skin of others.[14] Arcanaloths that were born as opposed to being promoted were more likely to be found there.[15]

To be promoted from arcanaloth to ultroloth was a task unlike any a yugoloth had previously faced. Rather than learning a special lesson an arcanaloth had to figure out how to take the place of an existing ultroloth, making the title incredibly exclusive. Making this task harder was the fact that every ultroloth not only realized this but was well aware of how they themselves rose to power, ensuring an arcanaloth would need to exercise creativity. A direct approach was also unwise as the yagnoloths were under orders by the ultroloths to execute any arcanaloth that tried to rise to power in such an obvious manner.[16]

The Tower of the Arcanaloths was thought to be the focal point of the caste's powers. After becoming an arcanaloth, a yugoloth could focus their mind and access all knowledge within the tower allowing them to gather information on the behaviors of those they had dealt with before, such as treacherousness or determination. However, this search was known to all other yugoloths equal to or higher than an arcanaloth and made their location known to such beings, making it impossible to do a search secretly.[14] Arcanaloths could only be permanently destroyed while on Gehenna, rather than on Carceri or Hades. When this happened, an arcanoloth's accumulated knowledge traveled to the Tower of the Arcanaloths to be absorbed into the racial memory of all arcanaloths.[17]

Like each of the greater yugoloths, arcanaloths could breed only with other members of their caste and produced young arcanaloths. The children were raised gracefully and given lessons in negotiation and diplomacy. In terms of food they were fond of eating bone marrow, partially as a show of disdain and also as an expression of their fiendish role as devourers of life from the inside out.[15]

Within the Book of Keeping was an incantation detailing instructions on how to brew a potion that would grant success in anything. The potion's actual effectiveness was unknown, but it involved a piece of an arcanaloth's heart.[3]

Arcanaloths were rumored to have originated within the Abyss but had been driven out by the demon lords due to their deceptive nature. It was also claimed that both the raavastas and rakshasas were the descendants of the arcanaloths, a notion supported by their mutual greed, but quickly dismissed as slander by the more honorable rakshasas.[10] 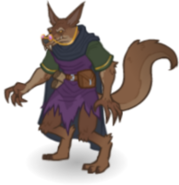 An arcanaloth from Idle Champions of the Forgotten Realms 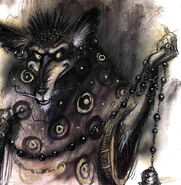