monstrous inhabitants of the North, enemies of Luruar[3]

The Argent Legion was the state army of Luruar.[3]

Formed in an attempt to ensure the safety of the smaller settlements of Luruar, the Argent Legion's forces were drawn from the various armies maintained by the more powerful city-states of that nation. Its purpose is to patrol Luruar's territory and garrison its settlements.[3]

Base of Operations[edit | edit source]

Based in Rauvinwatch Keep, which stood roughly 15 miles west of Silverymoon, the legion maintained a force of 400 troops (mostly dwarves) who spent their time either training or going out on patrols with the Knights in Silver. The other half of the Legion were stationed in or around Citadel Felbarr (100 dwarves, 100 Knights in Silver[4]) and Sundabar (200 soldiers), which had both seen heavy fighting prior to the formation of the Legion.[1] A force of 50 Legionnaires were also stationed in Jalanthar as it was a frequent target for orc and Uthgardt raids.[5]

Any member of Luruar's various official state military forces could be transferred into the Legion. Many cities chose to send their barely-trained new recruits to maintain their commitment to the force while not losing their own veterans. In 1372 DR the group numbered 850 soldiers - 200 Knights in Silver (Silverymoon), 250 Iron Guard (Citadel Adbar), 200 Shieldsar (Sundabar), 50 dwarves each from Citadel Felbarr and Mithral Hall, and 100 archers & cavalry from the Army of the Vale (Everlund).[3]

Methrammar Aerasumé was appointed High Marshal of the Legion by his mother, Alustriel Silverhand.[1] An able warrior, Methrammar was an excellent drillmaster whose training regimen turned green youths into elite warriors.[3]

The High Marshal of the Legion was considered the seventh member of the Nine Peers council that governed the League of the Silver Marches.[2] 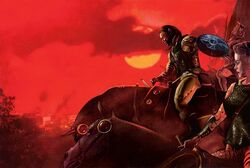 Full view of the illustration above. Click to enlarge.
Add a photo to this gallery

Retrieved from "https://forgottenrealms.fandom.com/wiki/Argent_Legion?oldid=428822"
Community content is available under CC-BY-SA unless otherwise noted.