Arkhan the Cruel (pronounced: /ˈɑːrkɔːn/ AR-kawn[3]) was a dragonborn paladin of Tiamat who lived in the late 15th century DR.[1]

In battle, Arkhan carried the magical axe Fane-Eater and carried a dragonscale shield. He also owned the Wreath of the Prism, an amulet that granted him control over a vicious manticore called Chango.[1]

After a brief visit to the world of Exandria, Arkhan replaced his left hand by a legendary artifact known as the Hand of Vecna, with the intention of using its power to free Tiamat from her prison in Avernus.[4]

By the Year of Twelve Warnings, 1494 DR,[note 1] Arkhan, having taken residence in a tower located near a monument dedicated to Tiamat in Avernus, had yet to succeed in his endeavor. Prolonged possession of the Hand of Vecna was slowly causing his left side to wither away, a process that could only be slowed down by sacrificing the life of good creatures.[4]

Arkhan is based on a character in the streamed campaign Force Grey. He is played by Joe Manganiello,[1] an American actor who is a lifelong D&D enthusiast.[5] 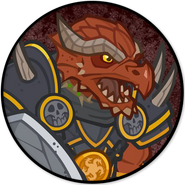 From Idle Champions
Add a photo to this gallery

Retrieved from "https://forgottenrealms.fandom.com/wiki/Arkhan?oldid=521823"
Community content is available under CC-BY-SA unless otherwise noted.