Ashabenford was the capital and largest settlement of Mistledale, the central, most-well-protected dale within the Dalelands. It served as a marketplace for local Dalesfolk farmers and generally a pleasant locale for visitors.[1]

Composed of rustic homes and collections of cottages, Ashabenford sat on the eastern side of the River Ashaba, though some of its notable buildings were found also on the west bank. The busy trade route of the Moonsea Ride passed through the center of the small town,[4] and it served as a major stop between Cormyr and Hillsfar.[5]

The presence of the Moonsea Ride meant the town had little need for a large open air market, with many services instead being found along the route. Local farmers keen to sell their wares avoided the main trade route, tending instead to stop the wagons in the many yards or lanes dotted around the pleasant backstreets of the town.[4]

As the Barracks of the Riders was located in Ashabenford, the town was regularly garrisoned and patrolled by around sixteen Riders of Mistledale. In addition, between 50 or 60 militia members were kept there in training.[7] 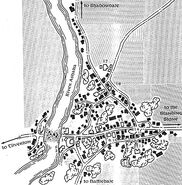 Retrieved from "https://forgottenrealms.fandom.com/wiki/Ashabenford?oldid=561990"
Community content is available under CC-BY-SA unless otherwise noted.