Assault of the Giants

Wizards of the Coast

Assault of the Giants

Assault of the Giants is a board game set in the Forgotten Realms setting. Play occurs in the Savage Frontier of northwest Faerûn. It is thematically linked to the Storm King's Thunder story arc.

Each player issues commands to his or her giants in the form of command cards (recruit, move, attack, pillage, and so on). This allows players to recruit new giants, send them out to attack settlements and other giants, and also to pursue special agendas based upon their race. For example, the Storm Giants seek to restore their lost monarch, King Hekaton. The Cloud Giants seek an ancient dragon treasure trove, and the Hill Giants seek an abundance of food with which to feed their massive monarch, Chief Guh.

In Assault of the Giants players send their giants out to wage war on each other and the small folk, but the game's real strategy lies in each player's ability to pursue their giant race's unique agenda, not only through combat but also through clever cardplay.[1]
”

At the start of the game, each player selects a specific giant race to play. Each player gets a few troops, a leader, and a giant champion set up in their home territory. They also get some resource cards, which can improve spells or give advantages in battles, and a few of their own event cards.

If playing with less than six players, a few neutral giants are set out on the board. Finally, a few global events are put out, which anyone can accomplish.

At the start of their turn, a player can claim one event: either their next personal event card or one of the global event cards. To do so they must meet the event's condition, which is typically to have giants in a certain space on the board. To accomplish this, a player must get their giants to that space, survive through all the other players' turns, then claim the event card on their next turn.

After optionally claiming an event, the player must play a command card of their choice. These come from a set deck of nine command cards, which are played out over time. The player just picks what they want from the ones they hasn't played yet. Each card has a base power.

Each player also has a Rest card; the purpose of it is to retrieve all the cards that the player has already been played, increasing their choices, but decreasing the power of their cards because it clears out combat enhancers and boosts. The Rest card also lets the player heal a giant and move around giantslayers.

Combat is carried out with a set of special dice. The number thrown is based on the strength of the troops. The die faces might generate hits, defenses, or magic. The magic can be turned into hits or misses if a player has already played combat-enhancing cards. A player may also get to play resources or spells to improve their combat ability and may even get to reroll some dice. At the end, undefended hits wound or kill giants. Killing giants is the main way to earn victory points.

After most of the ordning points are gone, players go into a final few rounds of play when they can attack home regions. When all is done, the ordning points earned for claiming events, playing special race cards, and killing opponents are added up, and the player with the most wins. 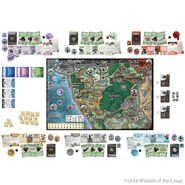 Game contents
Add a photo to this gallery

Retrieved from "https://forgottenrealms.fandom.com/wiki/Assault_of_the_Giants?oldid=435228"
Community content is available under CC-BY-SA unless otherwise noted.