Rogue
Astarion was a high elf rogue and vampire spawn who dwelled in Baldur's Gate during the late 15th century DR.[1]

The noble high elf had grey curly hair, and was several hundred years old as of the latter half of the 15th century. He was a talented rogue who was skilled at using the bow.[1]

Due to his unique infestation by a mind flayer tadpole, Astarion could move freely during the daylight hours and enter homes uninvited. However, he was still affected by running water, which burned him like acid.[1]

While others with the same infection sought to rid themselves of the parasite, Astarion sought to control it and gain mastery over his new powers.[1]

He sought out pleasure of all manner during his existence in undeath.[1]

Astarion's vampire lord patron was Cazador Szarr of the noble Baldurian Szarr family. While serving as Cazador's slave, he was forced to sustain himself on mere rats.[1]

Astarion was turned some time before or during the 13th century DR.[1]

In the Year of Three Ships Sailing, 1492 DR, Astarion began seducing a young fellow noble, trying to lure him towards his master. However, he was kidnapped by a mind flayer, placed into a holding pod in a nautiloid, and infected with an illithid tadpole. As the spelljammer passed over Yartar, it was assailed by githyanki who rode atop red dragons. After the nautiloid teleported through the planes, it crashed, and Astarion ended up somewhere across the River Chionthar.[1]

Upon awaking, Astarion found himself altered, and somehow more powerful; rather than undergoing the process of ceremorphosis, Astarion was able to resist sunlight and communicate telepathically.[1] 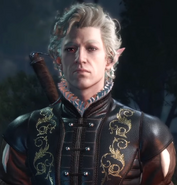