The Astral Sea, the Elemental Chaos, and the Negative Energy plane[citation needed]

Bloated malformed bodies, atrophied legs
Atropals were a race of unfinished immortals modeled after the gods, stillborn godlings, who spontaneously rose as undead[3] abominations. Existing solely to spread death and destruction, atropals roamed across the planes, hunting down any prey that came their way. Others were sealed away in forgotten delves.[6]

Most atropals' appeared as malformed bloated, grotesque and unfinished obviously undead creatures with splotches of black afterbirth. Their skin was wet, wrinkled, and dead, while the head was enraged and hairless. The creatures' black eyes stared with vacantness as the entire undead body drooled, oozed, and secreted pungent ichor. Their skinny appendages had tiny clawed hands while the legs were useless and atrophied. Unable to walk on the dead misshapen members, atropals always flew.[3][7]

Some atropals resembled ghouls to an extent, with pale red skin, long tongues, and razor-sharp teeth. Most of the flesh of an atropal was rotted, with swollen joints and exposed bones. Unlike ghouls, however, atropals lacked eyes, having instead empty, skin-covered sockets.[2]

An atropal scion was truly one of the most perverse undead creatures willed to unlife by dark gods of death. A piece of an atropal's godly flesh could become a "godling" itself of diminished power but just as filled with spite and evil, unless destroyed. If given unlife, the "atropal scion" became an unformed monster, resembling an overgrown dead fetus, sometimes with an umbilical cord still attached. Despite its appearance, an atropal scion was extremely intelligent and powerful. Unlike regular atropals, scions sought to spread evil via magically empowering themselves with knowledge of life and death.[5]

The atropals spewed obscenities, stuck in perpetual state of anger at the universe and their malformed existence.[3] These undead godling husks were hated by deities who actively tried to hide atropals underneath ancient crypts of long-dead civilizations to banish them to forgotten cemetery planes of existence. In times when atropals were unleashed on the Prime Material plane, they went on furious killing spree until destroyed or neutralized. Some sages speculated that some of the necromancer kings of old were actually atropals.[3]

An aura of cold negative energy[3] surrounded an atropal scion, so numbing that it could draw life from the living. The atropal's very gaze could cause death and they were dangerous spellcasters. Once unleashed upon a world they would quietly gather power until ready to make their claim to complete domination.[5]

Atropals could not be affected by any form-altering magics, such as polymorph or petrification. They were immune to energy drain, spells and abilities that affected one's mind, and were resistant to fire and ice. Also, like other undead, they were immune to poisons, diseases, paralysis, and unaffected by spells such as sleep and those that caused instant death or harmed via necrotic magic.[3]

These undead monstrosities had keen an extremely keen sense of blindsight that reached the area of 500 feet (150 meters) and their telepathic abilities had even greater range of 1,000 feet (300 meters)[3]

Upon destruction, atropals could not be resurrected via spells as they were not willing to return to the pitiful existence.[3]

Before facing their opponents personally, atropals unleashed armies of subservient undead creatures and nightcrawlers. Atropals often tried to disable any magical protection via the greater dispelling spell, especially to remove possible death wards. These undead godlings were powerful spellcasters and did not hesitate to use their sorcery to create greater undead, desecrate, and plane shift among others. After their opponents' wards were shattered, atropal used magics that could instantly kill their opponents, such as finger of death and slay living.[3]

Atropals were very durable, as well as dexterous, and when in a fight they could use this to outlast their enemies. When forced into a direct fight, however, atropals were armed with several powerful abilities. One of these was the atropos burst ability, which allowed an atropal to sap the life force of their foe, though, being undead, they did not heal from this but rather gained additional energy, which they sometimes then used to attack a living creature with necrotizing touch, which not only injured the victim but hindered their competence as well. Atropals also had a unique ability known as shroud of death, which allowed atropals to repair other undead creatures while bringing harm to the living.[2][3]

Sometime in the late 15th century DR, an atropal was found drifting in the Negative Energy plane by the lich Acererak and was brought to the Tomb of the Nine Gods in Chult to be nourished to godhood via an artifact known as the Soulmonger, which caused the onset of the death curse.[8] The malformed wretch was nursed by a night hag coven - the Sewn Sisters.[9] That atropal could not speak any legible language but could understand Celestial.[1] 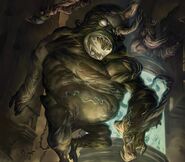 A depiction of an atropal from Adventures in the Forgotten Realms. 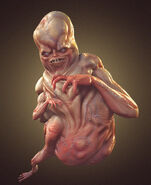 The atropal from Neverwinter (game).

The atropal from the Tomb of the Nine Gods.