An icy breath with a cold, ruthless chuckle
A blue-white aura leaving a trail of frost
A blank-eyed face of frost with hair emitting cold

Auril (pronounced: /ˈɔːrɪl/ AW-rill[13]), also known as The Cold Goddess, The Frostmaiden,[3] Icedawn[4], the Goddess of Winter,[19], and the Frost Sprite Queen,[5] was a fickle, vain, and evil deity, who was primarily venerated out of fear.[13] The few among the Iulutiuns of the Great Glacier who worshiped her called her Saukuruk.[8] She was additionally seen as being synonymous with the Queen of Air and Darkness by some communities of fey, such as those of the Shiverpine Forest in the Deep Wilds.[22] However, after the Sundering the Queen of Air and Darkness was seen to be only impersonating Auril in order to retain followers on Toril.[23]

Auril had a divine realm called Winter's Hall in Pandesmos, the topmost layer of Pandemonium in the Great Wheel cosmology.[4] Norse god Loki also made Winter's Hall his abode, a place to hide away whenever he fell out of grace with the other Aesir.[24]

During the Spellplague, Auril's realm was located within the Astral Dominion of the Deep Wilds and was known as the Land Under Eternal Ice.[22]

Following the Spellplague, Auril gained significant power by siphoning the faiths of Ulutiu, Aerdie Faenya, and Gruumsh/Talos into her own. In addition to her classic portfolio of cold and winter, the Frostmaiden claimed dominion over wind and storms, bringing her into direct conflict with the ancient primordial power Akadi.[9]

In earlier centuries, Auril was a member of the Deities of Fury, along with Malar, Umberlee, and Talos. Umberlee and Auril cooperated with some degree of confidence, while Malar and Auril despised each other.[13]

Kossuth and Auril were mortal enemies, but their followers seldom came across each other. Sune opposed Auril, as she blamed her for the destruction of much that was beautiful. Uthgar hated Auril as she turned the Elk Tribe away from his worship.[citation needed]

At one stage, Auril was in a relationship with Thrym, God of the frost giants. During that time she became the mother to the Empyrean daughter Nalkara.[25]

Sacrifices to the Frostmaiden were common, especially in the North, as people hoped to appease her and thus avoid cripplingly cold winters. She also had many secret temples along the Spine of the World that brought terror and dominion to small settlements of people trying to eke out a living.[citation needed]

Auril's clergy was loosely organized, and the main goals of most followers was to intimidate common folk and make them venerate the Frostmaiden to avoid reprisals from her clergy, or to have them make donations to her church. Some of her powerful clerics accumulated impressive personal wealth in this manner, some of which they sacrificed as offerings to Auril. Her priests wore ice white robes with blue trim, and were easily identified by the dire warnings they proclaimed of the wrath of Auril come the winter. They were also known to cast cold-based spells, many of which were described in the Codicil of White.[citation needed]

The Codicil of White was a magical book containing basic rites, rituals, services, and major ceremonies of Auril's faith. The book also had several pages devoted to the goddess' favorite arcane magic. It was created as a tool for Aurilian wizards and sorcerers to gain a better understanding of the faith.[29]

Many of the following divine magic spells were believed to be recorded in a holy book of Auril called Revelations of the Icedawn.[30]

In the late 15th century DR, Auril encroached onto Umberlee's domain by freezing her chaotic tides. Though Umberlee was once allied with Auril, she cut off this alliance, and turned to the other Gods of Fury, Talos and Malar. The three allied deities sought to take down the Frostmaiden, and she was forced to retreat to the most frigid region of Toril: the Sea of Moving Ice. Specifically on an island known as Solstice, the Goddess of Winter caused a seemingly eternal winter over the area, including Icewind Dale. As such, Auril became very weak and vulnerable, and self-isolated. In fact, she became so powerless that she could be slain by mortal creatures, which could force her to be banished until the next winter solstice.[1]

Symbol of Auril from Faiths & Avatars 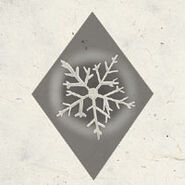 Symbol of Auril from Faiths & Pantheons 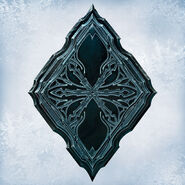 A holy symbol of Auril.
Add a photo to this gallery