King Azoun Obarskyr IV (pronounced: /ɑːzˈuːʌn/ az-OO-un[7]) of Cormyr was the king of Cormyr from 1336 DR to 1371 DR and a member of the Purple Dragon Knights.[9] During his reign, the kingdom experienced unprecedented economic growth. He was killed in the Goblin War by Nalavarauthatoryl.[4] He was counted as a mythic sovereign.[10]
“
My duty to Cormyr demands that I help avert a crisis that could threaten any part of the continent.
”
— King Azoun of Cormyr[11]

Azoun was a handsome man just under 6 feet and 0 inches (1.8 meters) with brown eyes, brown gray-streaked hair, graying mustache.[12] He was stocky, muscular, and physically fit for the man of his age who kept a rigorous exercise regimen.[3][13]

In his youth, Azoun was a rebel who cared nothing for boring politics and preferred adventuring with his friends. He often missed those days of no responsibilities and no weight of the crown. Even though Azoun remained an idealist, he would perform his duties and forge alliances when necessary. He punished criminals harshly but was a generous ruler and defender.[3]

Azoun was content to be in battle, and despite the risks to himself, would not allow himself to be excluded from any combat that might arise in his presence.[14] Although, being ready and eager, Azoun was an experienced and talented tactician who was using the troops, their skills, enemies' weaknesses, and the battle terrain.[3]

Surviving countless assassination attempts, King Azoun was never unarmed, he often had a long silver magical +4 dagger tucked away in his boot, along with other magical items ready for every occasion.[3]

Azoun's court in Suzail was famous across the realms for its refinement. The King was an avid patron of the arts, a poet, a musician, and he especially loved drama.[16]

On top of his combat skills, the King was adept at falcon-training, horseback riding, knew etiquette and heraldry. He also was a good mandolin player.[3]

Azoun's sword was contained in a very tatty scabbard. He had a collection of magical swords to choose from, but most commonly used were his vorpal sword and a +4 defender. When in battle, he wore his magical +5 full plate armor and a +2 shield adorned with an image of a purple dragon on a black background.[3]

When not on the battlefield, he wore his bracers of defense, a +3 ring of protection, and a ring of free action.[3]

He had a brown scarf given to him by Filfaeril as a token of luck.[13] In his right boot, he carried a wand that, when snapped, opened a portal to the royal palace, through which guards and priests were ready to step through in the event that Azoun required aid.[17] Azoun also had a hollow metal sphere that, upon spoken command, could transform into a key to unlock a secret vault in the depths of the royal palace. It is one of only five, the others possessed by Vangerdahast, the queen and princesses.[18]

Being the king of Cormyr, Azoun Obarskyr IV could get a hold of almost any item, equipment, combat beast, or a siege machine. Rare and magical items, he could easily commission to be created when needed.[3]

King Azoun could often be found in the company of his trusted friends, advisors, and adventuring companions of youth, Vangerdahast Aeiulvana the Royal Court Wizard, Dimswart the Sage of Suzail, and Winefiddle the cleric of Tymora. Together they were known as the King's Men back in the day.[3]

“
Adventures? Call them that if you must. I prefer "forays into lawlessness" or "bloodthirsty and destructive raids," because I'm on this throne. Were I in the saddle I rode as a youth, I'd see them as you do. Try not to fall off and break your neck, now.
”
— Azoun IV, said to a young noble who gave "adventuring" as his excuse for slaughtering two-score cattle[24]

In his rebellious youth, Azoun Obarskyr IV, under disguise, joined a band of adventurers called the King's Men. During that time he created a life-long friendship with Dimswart the mage, and Winefiddle the cleric.[16]

The Royal Court Wizard, a friend, and a teacher - Vangerdahast Aeiulvana often helped the young royalty to slip away to have his adventures, but just as often he ended up having to venture out to bring the rebel home. Many a time that coincided with the King's Men being in deep trouble and the court wizard arriving just in time to rescue the unruly youth.[16]

Azoun married Filfaeril on Eleint 2 of 1329 DR. Because of how many rumors persisted of his womanizing lifestyle until that time, he made a public renouncement of his earlier ways.[6]

In 1335 DR, then-young Azoun confronted by Zhentarim assassins. During that adventure, he met the thief Scoril "Shadowhawk" Cimber and his son Artus, who later became a Harper agent. The thief and his son attempted to rob Azoun but instead were attacked by the Zhents. Artus' father was captured and the young men were forced to work together to save him and defeat the magical assassins.[16][23]

By 1341 DR Azoun succeeded Tin driving the Fire Knives out from Cormyr after an assassination of a local lord. The Fire Knives were pushed all the way across Dragonmere to Westgate. This is where the assassins met the evil wizard Cassana and started financing her work.[25]

In 1352 DR, the Usurper King Gondegal attempted to establish a kingdom centered in the city of Arabel. Azoun led the army of Purple Dragons to reclaim the city. In all, Gondegal had power over Arabel for just eight days.[26][27]

“
Azoun turned back to the window and peered over the western wall again.
"You remember, Vangy, when I was your pupil and you used to give me those tests in ethics?"
"Yes, Your Highness."
"I always hated them. Still do."
"Only now, Your Highness," Vangerdahast replied softly, "they are no longer tests."
”
— Azoun IV and Vangerdahast discussing Mistinarperadnacles Hai Draco negotiation results[28]

In 1357 DR Cassana created a living construct that the Fire Knives programmed to assassinate King Azoun. The living construct escaped and gained consciences and became known as Alias of the Azure Bonds. The magical bonds still controlled her and eventually, she attempted to assassinate a young noble Giogioni Wyvernspur who jokingly pretended to be the King. Azoun was supposed to be present at the event where the assassination attempt occurred, he and Vangerdahast questioned the eyewitnesses, one of whom was Giogi himself. The young Wyvernspur ended up negotiating on behalf of the ancient red dragon Mistinarperadnacles Hai Draco who was searching for Alias at the time. King Azoun negotiated the dragon's departure from her lair in the vicinity of Suzail and gained an agent tasked with uncovering Alias' whereabouts. Giogi continued taking missions from King Azoun after this debacle for years to come.[29]

In 1360 DR Azoun faced with the Tuigan Horde when the newly assembled force menaced Western Faerûn with conquest. The king thought it his duty to assemble the forces of the western lands to confront and stop the nomad horde before they were to massacre the population. Acting against Vangerdahast's council, the King assembled the force of twelve thousand soldiers from Cormyr, the Dales, Sembia, Tantras, Hillsfar, the Living City, and Earthfast. More troops came from a strenuous alliance with Zhentil Keep, and hired mercenaries through imposed shield tax. Neighboring countries also chipped in with coin, mercenaries, and magic users to bolster the Crusade's forces. The final count of 30,000 men on Azun's side versus 100,00 horselords of Yamun Khahan.[16][30] Not all citizens of Cormyr supported the war campaign, notably, the Trappers Guild publically opposed the King's discussion. During the Azoun's address to the citizens of Cormyr, and rally to arms, a Trapper used a fireball spell scroll to unsuccessfully attempt to assassinate the King in the view of everyone assembled.[31]

The forces clashed between the cities of Telflamm and Tammar. Azoun and Vangerdahast attempted to unsuccessfully parley with the Khahans and the battle started the following day. Azoun was shot in the leg by one of the horselords. The Crusade's cavalry was almost completely destroyed but they managed to reduce the Yamun Khahan's forces by a thousand. Princess Alusair Obarskyr took command of the Crusade's forces and commanded to retreat and regroup in the Forest of Lethyr, knowing that it would disadvantage the Tuigan horse-riders. The second day of battle was wone thanks to Alusair's leadership, dwarven trap-making for the Horde riders, and Cormyrian War Wizards' illusions that kept the traps hidden. King Azoun confronted Yamun Khahan by singling his war banner out and allowing him to penetrate the Crusade's defenses. The confusion and tireless assault followed, the Khahan was surrounded by now unmasked traps. The Horselord managed to kill the leader of the dwarven forces, but in the end, he was defeated and killed himself by Azoun's hand. With the fall of their leader, the Horde was broken and retreated back to the east. The Crusade's cost was steep, 20,000 men out of 30,000 survived.[16][30]

Azoun took an interest in the canal project began in 1364 DR by the city-state of Innarlith that connected the Lake of Steam to the Nagaflow, and thus connected the Sea of Fallen Stars to the oceans of Toril. The canal would have enabled Cormyr to trade with the western states without needing to take overland routes that were harassed by the Zhentarim. He sent an ambassador and funds to support the work of its construction.[32]

In 1369 DR Azoun was on a hunt with Baron Thomdor, Duke Bhereu, and Aunadar Bleth when he was poisoned by a magical abraxus in the abraxus affair, putting him in a coma-like state.[33]

King Azoun died at the culmination of The Goblin War that started in 1370 DR and ended in 1371 DR. The dragon Nalavarauthatoryl amassed massed an army of orcs, grodd goblins, the seven ghazneths to attack Cormyr. Azoun perished in his final battle with Nalavarauthatoryl.[34] 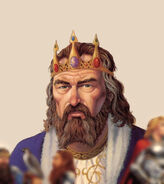