listen) also known as 1-horned horrors or ebony deaths, [5] were a type of tanar'ri demon that served both as assassins and recruiters.[3][4] They possessed a devilish deceptiveness, combined with demonic bloodlust.[1]
“
These leathery skeletons recruit for the true tanar’ri. In exchange for their own freedom, they get other fiends to fight. If a babau can not find enough tanar’ri to fill a high-up’s army, it must take its own place in the ranks. Oho! Most babaus do their jobs very, very well.
”
— Xanxost the blue slaad[8]

Babaus stood about 6‒7 ft (1.8‒2.1 m) tall and weighed 140 lb (64 kg), their height accentuated by their elongated form. Their bodies were so gaunt that they appeared skeletal, covered in a form fitting, black, leathery skin.[3][6] A thick, dark red paste was secreted from their odorous pores that was both slippery and acidic but their talons specifically were coated in blood, filth, and rotten flesh, resulting in their terrible stench.[6][4] Contrasting their emaciated forms were their oversized extremities, as their hands, feet, and head were more appropriately scaled for a hill giant.[5]

Like the rest of them, their skulls were tall and long, with pointed ears and jaws filled with so many jagged teeth that they took up half its head.[6][1] Jutting out from the back of their skulls was a single, long horn-like growth that curved forward and downward. A babau's glare was particularly menacing, causing their eyes to start glowing red.[5] Strangely for a demon their movements were fleet and mechanical, making them somewhat alien even among tanar'ri.[4]

Both cautious and deceptive, babaus would take every step to ensure their victory when on the job. They enjoyed toying with lesser opponents when it was safe enough to do so. Despite their vigilance and preparedness they attacked with vigor and savagery when they finally struck.[6] Their more subtle sadism and stealth set them apart from their more overt demon-kin; for example their capture of targets for later torture as opposed to immediate bloodshed.[2]

The acidic ooze that covered a babau made it incredibly hard to damage for two reasons. Weapons and flesh that made contact with the slime were corroded, and its oiliness caused more sharp, precise weapons to slide off.[4][5] Their eyes could produce an effect similar to a ray of enfeeblement, sapping the strength from any nearby target.[1] Adding to their supernatural repertoire was their array of magical spell-like abilities including darkness, dispel magic, fear, heat metal, and levitate.[1] Although normal attempts to gate in tanar'ri normally resulted in a few cambions or another babau it was possible that a more powerful demon would heed their cry for help.[4]

Despite their claws being wicked sharp and their love of pouncing on their victims from above[5], babaus recognized the inefficiency in doing so and normally opted to use weapons, preferably two-handed ones.[4][6] If outmatched, babaus were still capable of fiercely fighting off their attackers, not only with their claws, but sometimes their teeth and horn.[4]

Babaus carefully formulated plans and concocted sly schemes in order to avoid engaging their opponents fairly, and were skilled in sneak attacks and secrecy. Normally they tried to target the opponent assessed as the biggest threat before working their way down. This way they could be free to indulge themselves by tormenting weaker foes.[6] One of their preferred tactics was to abduct enemies off the battlefield, teleporting them somewhere else to be dealt with later.[2]

In warfare, babau gangs could make excellent strike teams and were typically sent to on raids or assassination missions targeting obvious champions or leaders. They could teleport to their destination and wreak havoc before disappearing again, or failing this approach undetected by more conventional methods. They always tried to make the best use of their terrain and allies, repositioning themselves to exploit weaknesses in the enemy.[9]

The deviousness of babaus was a trait valued by nearly every demon lord within the Abyss, with almost every one having a small gang of babaus to serve as secret agents. Espionage, sabotage, and assassination were all common tasks for them, with their cunning stratagems compensating for their relative weakness and deceptiveness.[2]

However they also served another role within the Abyss, roaming the layers to find low level tanar'ri to draft into the Blood War. Babaus corralled other demons together in exchange for their own relative freedom, and failing to fill the ranks with other demons would require the babau in question to fill it themselves.[8] Because of their integral position in the Blood War, demons more powerful than them occasionally provided them with assistance, less out of loyalty than in order to further their duties.[4] Having superior demons possibly arrive to watch over them was as terrifying to their assailants as it was to the babaus.[8]

Within the Abyss they had a complex relationship with the various other types of demons. They would sometimes work with succubi who had a similar deceptive streak and be paired with vrocks when on the battlefield.[2][6] However because of their roles as recruiters, vrocks, hezrous and glabrezus as well as several other lesser demons hated them and ganged up on them in order to escape service.[4] Nalfeshnees in particular feared and loathed babaus in great numbers, a feeling shared by the babaus, who had a taste for nalfeshnee flesh.[5]

Discretion and wariness were rarities in the Abyss, and the origin of demons that specialized in it came down to two of the most deceptive fiends known to the planes. During an invasion by Graz'zt into the Abyss, the former archdevil was forced to surrender to the chaotic corruption of the plane after entering just the 1st layer. After his failure, Glasya was sent to continue where Graz'zt left off in the Plain of Yawning Pits and punish him along the way. When their armies clashed, Asmodeus's daughter ended up thrusting her sword through him, spilling his blood everywhere, however rather than kill him the blood splatters animated and helped to rout Glasya. The babau's abrupt appearance secured Graz'zt's position as a great demon lord and a vast majority were still loyal to him.[1][2]

Babaus were involved in the Battle of Daelyth's Dagger in 1374 DR in the Lost Peaks.[10] 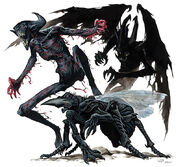