Any land or underground

Banshee (Irish)
A banshee (pronounced: /ˈbænʃi/ BÆN-shee[6]), also known as a groaning spirit,[1] was a female undead phantom, typically a selfish, strong-willed spirit that embodied the essence of hideousness.[7] Oftentimes they were the spirits of elven women, whom in life had an evil alignment.[1]

A banshee didn't have a defined shape, but rather a misty form with vague and flowing features that mirrored her former form in life. As time wore on, a banshee became more and more distorted, though was still recognizable as a humanoid.[7]

Banshees tended to enjoy bringing death to any living creature that they came across.[7]

Although their shape was incorporeal, the appearance of a banshee was horrific, and their mere presence would draw the energy from their surroundings to the point of stunting local floral growth.[7]

Being a form of undead, banshees were immune to all manner of spells that affected the mind, such as charm or sleep. They were also typically impervious to harm from any form of lightning and excessive cold.[1]

Banshees hated all living things with an unholy fury; they could sense life approaching them and would attack anyone who trespassed in their territory. Along with their terrifying visage, the mere chilling touch of a banshee would drain her victim.[7][1]

The banshee's most feared weapon was a piercing wail that was as harmful as any material weapon.[1] This scream was deadly to almost all who could hear.[7]

In the Utter East, banshees were considered "faerie hags" and were actually creatures of nature, not blighters of it. Their wailing lamented the destruction of the wilderness and caused harm to civilized beings who came upon them. They wore rags, had white hair and blue skin, and had no legs, and hence flew a short distance above the ground or water. They were found in the Realm of Lands, and could not, or would not, enter even the ruins of buildings.[8][note 1]

These spirits were typically found around desolate countrysides and moors.[1]

In the same way a banshee retained a shadow of her former appearance, she was also able to speak and understand the same languages with which she was fluent in life.[7] 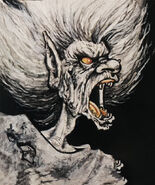 A banshee from the ruins of Myth Drannor.