Endless Maze, the 600th layer of The Abyss

listen or: /ˈbɑːfoʊmɛt/ BAF-oh-met[10]) was a demon lord who ruled a layer of the Abyss called the Endless Maze. He was the Prince of Beasts and the Demon Lord of Minotaurs, an embodiment of savagery and an insidious force that wormed its way into the heart of his followers to deceive them into embracing brutality.[citation needed]
“
We are all beasts, and only delusion prevents you from seeing the truth.
”
— Oostarix, Eater of Men and cultist of Baphomet.[11]

Baphomet had the appearance of a 12 ft (3.7 m) tall humanoid with a bull's head, a bovine tail, and broad, stubby hands and feet. His body was covered with coarse black hair. His horns curved downward and outward.

Baphomet could spit out gouts of unholy water.[citation needed]

He wielded a giant bardiche.

Baphomet's realm was the Endless Maze, the 600th layer of the Abyss, supposedly infinite in size. Here, Baphomet dwelt in his palace, the Lyktion, and spent his time creating various new demonic breeds in his infamous Tower of Science. Some of his more successful creations were the goristroi, the bulezaus, the ghours, and the feral ankashars.[citation needed]

Baphomet hated Yeenoghu, and the two were bitter enemies. They'd warred against each other for as long as they could remember, and both forgot the origin of their feud. Baphomet's other enemies included the demon lord Orcus who imprisoned him,[12] and the Demon Queen of Harpies, Ardat.[13]

The hatred between Baphomet and Yeenoghu started with an alliance. Both lords had allied to invade an elven kingdom, but were eventually pushed back by the elves, Bahamut, and an alliance of good dragons. Both demon lords blamed the other for the defeat.[citation needed]

Baphomet had an unusual relationship (for a tanar'ri) with Pale Night, who shared his lair. The two were neighbors with what amounted to an unofficial noninterference pact, as Pale Night's influence did not really extend much further than the edges of her plateau. Though they never joined forces to accomplish a goal, it was possible that any attempt to lay siege to the holdings of one might provoke the other.[4]

“
Horned King! Remove the veil of deception and reveal unto us the true nature of mortality!
”
— A knight of the Horned King[11]

Baphomet had a multitude of minotaur, ogre, and giant followers and minions. He was also served by ghour demons, a race of demons resembling burly, hairless minotaurs that commanded troops of these mortal minions. He sought to use them to further his schemes, notably to gain the upper hand in his battles against Yeenoghu. A multitude of other twisted creatures revered Baphomet as well, some becoming his thralls, and if they pleased their bestial patron, they would be granted rulership of a portion of the Endless Maze. Those who displeased Baphomet were eaten.[citation needed]

Baphomet increasingly attracted a following amongst minotaurs. A multitude of other twisted creatures revered Baphomet as well, some becoming his thralls, and if they pleased their bestial patron, they would be granted rulership of a portion of the Endless Maze. Those who displeased Baphomet were eaten, of course.[citation needed]

Baphomet granted spells as a lesser deity[5] and had as his symbol a twisted circular maze awash in blood.[4]

By the Year of the Prince, 1357 DR, Baphoment had been captured by an alliance between Yeenoghu and Orcus and resided as prisoner in Orcus' layer.[12][14][note 2]

It was suggested that Baphomet began his existence as a mortal creature, though it was unclear whether he was a beast that lived as a man or a man who lived as a beast. It was also suggested that he was cursed by the gods for daring to treat them like cattle, and thus banished to the Abyss. In any case, Baphomet reveled in his power, seeing the curse more as a blessing.[citation needed]

The D&D demon lord Baphomet is based on the middle-eastern entity Baphomet, whom the Knights Templar were later accused of worshiping and later adopted in Western occultism. His appearance is similarly based on the goat-like figure depicted by occultist Eliphas Lévi. Baphomet first appeared in D&D in the 1st-edition Lost Caverns of Tsojcanth (1982) 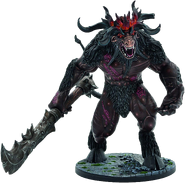 A miniature of Baphomet.

Adventures
The Throne of Bloodstone • Out of the Abyss • Baldur's Gate: Descent into Avernus
Novels
Referenced only
Archmage