Forgotten Realms Wiki
Register
Don't have an account?
Sign In
in: Articles in need of citations, Barbarians, Barbarians (1e),
and 8 more

Human
Barbarians were mighty warriors[8] who relied on their strength and incredible toughness, characterized by a bestial rage empowered either by ancestral totems and nature spirits[9] or an inner passion for violence.[10] Barbarians were less versatile than fighters but were tougher[11] and capable of dealing heavy damage to their foes much more quickly.[12][13]

The most famous barbarian of Toril was likely Wulfgar, friend and companion to Drizzt Do'Urden.

Barbarians were common within several organizations of Faerûn such as Uthgardt warrior traditions of the Silver Marches and Icewind Dale, the primal warriors of the Reghed Glacier, wild tribes of the Chondalwood, Chult, and the famous berserkers of Rashemen and its neighboring regions.[14] However, contrary to common belief, not all warriors who lived outside civilization's borders were barbarians. Only those who embraced the wild and primal ways of the rage could rightly call themselves a barbarian, imbuing them with a wild spirit not found among most warriors.[15] Where civilized people emphasized what separated from them wild animals, barbarians took pride in their bestial nature and looked upon the tamer sensibilities of civilization with disdain.[16] Barbarians' feral nature meant that they lacked the discipline to be lawful, though all other alignments were found among barbarians.[17]

Barbarians had a reputation, perhaps not completely deserved, as reckless ruffians and savage nuisances who needless disrupted society by acts of mayhem. However, barbarians, while undoubtedly feral and unpredictable by the nature of their rages, were not necessarily uncultured brutes. Time and time again, barbarians proved their cunning and resourcefulness as well as their sheer physical power and endurance. Sometimes, in spite of their aversion to an organized order, barbarians even demonstrated honor.[17]

However, barbarians were united - no matter their origins - by a marked lack of discipline or patience for the laws and traditions that others adhered to. Likewise, while a generalization, it is true to some degree that nearly all barbarians came from outside the confines of settled civilization, being far more common among nomadic tribes or frontier settlers than they were among urban city dwellers. It is from these remote origins that barbarians often derived their reverence for nature, which brought them closer to druids, rangers, and others who venerated the wilderness.[17]

Many barbarians were human, since humans were among the most widespread of the races, as well as in many cases, the most uncivilized. However, orc and goblinoid barbarians were more common still and were sometimes the most commonly encountered warriors of their race.[17] Barbarians from other races were relatively rare, though among elves there were the wild elves, among halflings the ghostwise, and among dwarves the wild dwarves, each of which possessed barbarian traditions. Half-elves from the Yuirwood were also sometimes drawn to the way of the barbarian, as were planetouched raised among tribal cultures.[14] Dragonborn, goliath, and half-elven barbarians were also somewhat common, with dragonborns and half-elves preferring the way of thaneborn barbarians, while goliaths were more often rageblood barbarians.[18]

Barbarians held varying attitudes towards magic. On the one hand, barbarians distrusted most things they did not understand and this extended towards what they called "book magic" or magic learned in a school or university, such as that used by swordmages or wizards.[19] On the other hand, barbarians were themselves wielders of primal magic,[15] as were the druids many barbarians called friends or allies. Likewise, barbarians often showed a large degree of respect for sorcerers, whose approach to magic was similar to their own unbridled style of combat. In no small way, it was likely that the barbarian prejudice against scholarly magic was due in some part to the fact that many barbarians were illiterate.[19]

Barbarians' bravery and wanderlust made them uncommonly suited for the adventuring lifestyle. Often coming from nomadic tribes, most barbarians had few qualms with the traveling life typical to adventuring parties. Of the difficulties suffered by barbarians in adapting to a life of adventure, the greatest was most commonly the loss of family structure that comes from leaving the tribe. With time, however, many barbarians found the bonds with their new companions a worthy substitute.[20]

As handy with a weapon as a fighter, barbarians became tougher and more agile as they grew more powerful. The most experienced barbarians were almost incomparably powerful, with a strength and constitution well beyond that of most mortals.[13] Though barbarians often used one-handed weapons, many preferred to use two-handed weapons in order to deal more damage to their foes. Barbarians were also well-versed in the use of light armor, and many lacked training in heavier forms of protection such as chain shirts or shields,[15] while very few were trained in and most lacked training in heavy armor, such as plate mail.[20]

Because most of them were untrained in the use of heavy armor, barbarians trained themselves to take incredible amounts of punishment that could easily fell less sturdy warriors. Additionally, most barbarians were capable of moving much more quickly while wearing half plate or lighter armor, by a factor of between thirty and forty percent. Another boon to barbarians' feral and exposed style of attack was their aptitude for quickly following up one attack with another immediately thereafter, overwhelming their enemies until they were able to deal fatal blow. This, along with their instinctive sense for danger, which made them nigh impossible to flank effectively or put off guard, made barbarians far more formidable than their lightly armored appearance would suppose.[13]

Many barbarians drew upon the primal energies of the natural world and its guardian spirits, often in the form of ancestral totems, for empowerment, gaining powerful abilities called evocations.[21] The feral might gained by barbarians could manifest in many other ways and some used it to empower themselves to the point of nigh invulnerability, finding it easier to take blows and plow onward rather than dodge them. Others gained the ability to literally shape their fate, affecting the quality of luck dealt them through force of will.[18]

The most distinctive aspect of barbarians was their ability to "rage," wherein they let loose powerful emotional bursts fueled by their primal power or inner fury.[16] When they raged, barbarians gained a number of powerful benefits, including an increase in physical prowess, and greater insensitivity to many forms of physical damage.[22] This rage usually lasted about a minute, but with experience and training, most barbarians could extend it indefinitely.[23]

Barbarians also were known to take on other, less common abilities. While raging, barbarians were typically unable to cast evocations, spells, or other similar abilities.[22] Some barbarians were more skilled with lesser evocations whilst raging. Barbarians could also use a fraction of their raging power to deal a devastating attack known as a rage strike.[24]

Path of the Berserker[]

Where some barbarians drew upon the essence of nature and primal magic for their power, barbarians on the Path of the Berserker instead relied on their own fury and unbridled bloodlust to pull them through a fight. As a result, berskerers relied less extensively on primal magic and instead focused on improving their rage ability. When a berserker raged they could enter into an even deeper state of primal fury known as a frenzy. While frenzied, a berserker was capable of attacking more quickly, although such effort eventually tired them out. Raging berserkers were also utterly fearless and immune to the effects of charms.[25]

In addition to utilizing their rage in a way far greaterthan other barbarians, berserkers were also much more frightening to behold. Sufficiently powerful berserkers could actually cause their enemies to run in terror from them through their presence alone. Experienced berserkers also maintained exceptionally good battle reflexes, allowing them to strike a retaliatory blow to anyone who injured them in a fight.[26]

Path of the Totem Warrior[]

Barbarians with a more spiritual side pursued the Path of the Totem Warrior, a calling which enhanced the barbarians' capacity for primal magic and forging a strong connection between them and their spirit animal. The spirit animal chosen by Totem Warriors - which was often related to their particular tribal culture - granted them a number of supernatural abilities, such as the ability to carry extra weight, enhance the ability of their allies in battle, or even fly a limited distance in short bursts. Additionally, Totem Warriors also sometimes took on physical features similar to their spirit animal, such as excess hair or unusually colored eyes.[26]

In addition to the abilities mentioned above, Totem Warriors also gained the ability to cast druid spells such as beast sense or speak with animals as rituals. Their ability with these spells were somewhat limited compared with that of a druid, but nonetheless allowed the Totem Warrior to tap into the primal essence of nature in order to enhance their awareness or gather information.[26] 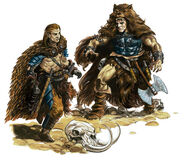 A depiction of two totem barbarians.

A barbarian engaging in the age-old art of plundering.