Barding was a general term for armor designed to be worn by mounts. It was most often designed for horses, though people were known to make barding for plenty of other mountable creatures in the Realms,[1] as well as some tauric races.[13]

Barding offered protection for mounts, though it came at many costs. Wearing barding typically inhibted a mount's speed and maneuverability as well as made them tire out more quickly. Because of this, it was typically used only on large and powerful mounts.[1] Typically the most protective armors were some of the heaviest. When equipped with barding a mount needed to be given special attention, making sure that it didn't chafe them or make them sore.[14]

Much like standard armor, barding was typically made by armorers. Though shieldsmiths were often capable of making adequate barding.[15] Many common men lacked barding for their horses as it could be very expensive.[1]

Following the development of barding for horses, many in the Realms sought to breed stronger horses that would be capable of both wearing barding and carrying an armored rider. Over time this mount armor paralleled the development of armor for humanoids and other races, centered around the conundrum of obtaining better flexibility and a lighter weight whilst not sacrificing protection.[1]

When King Azoun IV of Cormyr lead an alliance of nations throughout Faerûn against the Grand Army of the Tuigan in 1360 DR, the fighting men of his own nation had varying degrees of barding. The wealthier nobles generally had full plate barding for their horses, while nobles of lesser means had either banded or full scale mail. The standard Cormyrian troop had either chain or leather barding for their horse.[17]

In the late-15th century DR, when corsairs from Luskan fought against explorers from Delzoun for control of Gauntlgrym they utilized barding on howler mounts.[18]

Some types, known as half barding and partial barding, only offered partial protection for a mount. The former in particular only covered the front and forward sides of an animal. These types of barding were not the same thing as simply removing some of a mount's full barding — they were specially formed, fitted, and balanced for protection.[19] Half barding was far more common than full in warmer or humid climates. In such regions, light full barding was most commonly used.[1]

Barding came in a wide variety of materials and types similar to those armor worn by humanoid races. These included the following:[7]

A paladin mounted upon a white horse with partial barding. 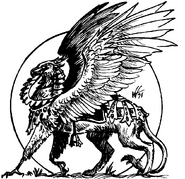 A griffon wearing some form of barding. 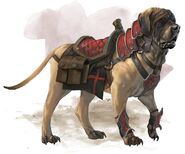 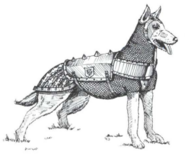 A dog wearing a combination of chain and plate barding

An orc riding upon the back of a rhinoceros that has been domesticated for war and equipped with partial barding.

A mounted brown bear adorned in barding, from Neverwinter

A female paladin charges into battle on a barded horse on the cover of Dragon #398.

Retrieved from "https://forgottenrealms.fandom.com/wiki/Barding?oldid=648446"
Community content is available under CC-BY-SA unless otherwise noted.