listen) were large, eight-legged reptiles with the terrifying ability to poison or petrify their prey. Though not malicious, basilisks were indisputably dangerous.[2] They could be found all over Faerûn.[citation needed]
“
Just as a basilisk's eye can turn men to stone, their bones can petrify a man's fate.
”
— Elusina the Grey[7]

Basilisks had eight legs, which they crawled upon. Basilisks came in a variety of colors from dark gray[2] to dark orange, although they also commonly had a dull brown body with a yellowish underbelly. Basilisks possessed a single row of bony spines that lined their backs and a few had a curved horn atop their noses. Basilisk eyes were, however, the most notable feature, glowing with a pale green light. Adult basilisks could grow to be about 6 feet (1.8 meters) in length, not counting the tail, which could reach another 5​ to ​7 feet (1.5​ to ​2.1 meters). They typically weighed around 300 pounds (140 kilograms).[3]

Basilisks could be found nearly everywhere, including subterranean biomes. Typically, basilisks sheltered within burrows, caves, or other similar areas. These dens were sometimes distinguished by what appeared to be statues, although these were, in fact, creatures that had been petrified by the gaze of the creature.

The Bedine called basilisks hagar motab or "bringers of stone-death", and it is from a Bedine explorer where most of the facts about basilisks came from.[8]

“
No one carves statues of frightened warriors. If you see one, keep your eyes closed and your ears open.
”
— X the Mystic's 4th rule of dungeon survival[1]

Although basilisks were known for their ability to petrify their prey, only a particular breed was actually capable of this, the stone-eye basilisk. However, both they and the venom-eye basilisk had magically empowered eyes that could be used as a weapon by the creature. This power was fueled by the soul of the basilisk in question and was non-physical in nature.[2]

Basilisks had a very slow metabolism, making their movements sluggish and clumsy. As a result, basilisks relied upon their powerful magical characteristics for hunting and were unprepared for a hard pursuit. As a result, prey that fled usually got away unharmed. To prevent this, basilisks typically laired in hidden dens, waiting for any prey unfortunate enough to wander in, even if it was extremely small. Basilisks had a very robust digestive system, however, and could digest even stone. When not hunting, basilisks slept off their meals in their lairs, sometimes in small groups.[3]

Basilisks were lazy and cowardly creatures, but evilly cunning. They made their lairs in dark underground caves where there was a ready and easily accessible food and water supply. They were easy to anger, though they never fought to the death if it could be helped. They were observed to be irrational and possibly insane half the time but shrewd hunters the other half. When hunting, they pounced from hiding and attacked with their petrifying gaze and vicious bite. They only needed to eat one large meal (the size of a deer or a humanoid) a month, owing to their slow metabolisms, though would apparently gorge themselves to death if provided with enough meat.[citation needed]

The tiny creatures (only two or three inches long when just hatched) burrowed slowly into the statues. They apparently lost their ability to eat petrified prey when they matured to adulthood. An adult with no young that had petrified a victim simply left the statue standing where it was struck, though greater basilisks were more likely to contemptuously smash a statue with a swipe of their tails.[citation needed]

A frozen greater basilisk served as a guardian for a Lockstone placed atop Stoner's Needle in the Sword Coast lands, having been set there by the extraplanar being Imgig Zu to prevent the fire elemental Jogaoh (who'd been trapped in the form of a dwarf by Imgig Zu) from regaining his freedom. Jogaoh feared the basilisk too much to make the climb up and take the Lockstone. When Vajra Valmeyjar, Cybriana, Timoth Eyesbright, Onyx the Invincible, and Priam Agrivar sought out Jogaoh in the Year of the Prince, 1357 DR, he agreed to help them provided they retrieved the Lockstone for him. Atop the tower, Jogaoh took the Lockstone and was restored to his fire elemental form, then returned to the planes before the basilisk awoke to attack Vajra and Priam. Vajra slew the basilisk, using the reflection of the gem so it would turn itself to stone.[9]

A basilisk dwelt in the western forests of Wyllowwood, a layer of Undermountain.[10]

Although basilisks were usually thought of as one variety of monster, there was more than one variety:

Stone-eye basilisk
The archetypical basilisk, capable of petrifying its victim with its glare.
Venom-eye basilisk
A less famous variety that caused its victims to become poisoned rather than petrified.

The greater basilisk was a rare breed of the common basilisk, similar in most respects, except it was larger and with a low intelligence and an evil disposition. It was extremely near-sighted, and consequently the range of its petrifying gaze was much shorter.[11] 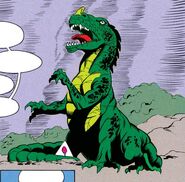 A greater basilisk in the AD&D comic "The Bounty Seekers Of Manshaka".

A basilisk in the game editor of Neverwinter Nights. 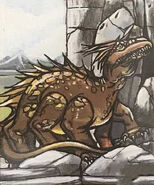 A depiction of a lesser basilisk from AD&D Trading Cards.