Forgotten Realms Wiki
Register
Don't have an account?
Sign In
Advertisement
in: Ethnicities, Pages with stub sections, Tribes,
and 14 more

Typical for goblins
The Batiri were a collection of clans and tribes of goblins in Chult known and feared for their tracking skills.[1][2]
“
No, no. There are Batiri all over the jungle, like sand fleas at a beach or civil servants at a cheap pub. It's said among the locals that you can't fall out of a tree without landing on a goblin…
”
— Byrt the wombat[3]

Most Batiri had green skin,[2][note 1] which blended well with the jungle surroundings. In all other ways, they appeared as typical goblins.

Batiri were feared by the other races of Chult and were considered "bloodthirsty" creatures. They were especially talented at the skill of tracking through the jungle and were experts in the lore of the jungle.[1]

The Batiri usually hunted at night, taking advantage of their natural darkvision. They preferred to use crude short bows and spears, but they were very adept at such weapons. A skilled warrior or general might be so fortunate to possess a stolen metal weapon from one of the neighboring human tribes or fallen adventurers.[1]

The Batiri would consume the victims of their raids or battles, provided they were not themselves Batiri.[1]

A Batiri clan usually consisted of between 25 and 200 individuals. They rarely occupied villages but instead lived nomadic lifestyles, traveling by night from one camp to another. At some camps, they would build permanent huts over shallow pits, for which the primary purpose was shade. Such huts did not belong to any clan, but were used by whichever clan happened to be camping there that day. (If a fight rose up about who could rest in a hut, the argument would be settled by blood.)[1]

The largest populations of Batiri were in the regions surrounding the Valley of Lost Honor.[4][5]

While the Batiri were often considered cannibals, they only ate the flesh of other races and never the members of the Batiri tribe. To eat another Batiri resulted in a punishment of death.[1] Batiri did not kill each-other, however, taking sliced off fingers and hands of their opponents was a common place as the Chultan goblins were often locked in wresting, punching, and aggravating one another. When a Batiri died, their bodies were left to rot under the jungles' sun. Kaverin Ebonhand suspected that the bodies were left alone not due to respect but for them to attract giant rats, hyenas, vultures, and small carrion-feeding dinosaurs. These scavengers were easy target for Batiri arrows and spears.[6]

In name, a queen ruled all Batiri tribes. She came to her throne and was disposed from it through combat in an arena against any challengers. She traveled with whichever clan she belonged to. At times, an especially powerful queen would instead attempt to set up a capital and have a wooden palace built.[1]

Every clan worshiped its own patron deity. Each Batiri deity had an avatar in one of the dangerous monsters or dinosaurs of the region. They had a sacrificial belief system that revolved around encountering the deity's chosen avatar. For example, the Batiri worshiping a god represented by a triceratops might perform a sacrifice when coming upon such a beast in the jungle by chance.[1]

Batiri believed that volcano eruptions were, in fact, the gods spewing food they did not like out.[7]

The growth of the Batiri population occurred after the great civil war between the Tabaxi and Eshowe human tribes in Chult, when the near annihilation of the latter group left a vacuum for the goblin tribe to fill.[1][8] By 1372 DR, the Batiri encompassed 20% of the population of Chult's peoples.[2]

Sometime around 1367 DR, a rare powerful Batiri queen, Queen M'bobo, was slain. Her death triggered a goblin war among the clans to find her successor.[1]

Clans were sometimes named for the deities they worshiped. Other clans identified themselves by other features. Examples of known clans include:[1]

Dimetrodon Clan
This clan was no longer nomadic and instead had villages close to Chultan dwarves, with whom they engaged in trade.[1]
The Gouged Orbs
This clan ritually gouged out an eye as part of their coming-of-age ceremonies.[1]
Kuro
Like the Dimetrodon Clan, this clan was no longer nomadic and traded with the Chultan dwarves.[9] It worshiped the god Khurgorbaeyag,[10] whose avatar was the gorgosaurus[11][9] In 1367 DR, the tribe was ruled by a "queen" named Irtana,[12] and its shaman was her younger brother,[13] Erytulk.[12]
Oogra
This clan worshiped a god whose avatar was the stegosaurus.[1]
Biting Ant Tribe
This clan wore stylized wooden masks that resembled ants,[14] colonies of which they kept for defense. For a time, they worshiped a shield guardian that was known as Vorn.[15] 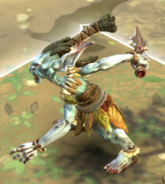