This article is about the prestige class. For the fighter build, see Fighter.

Dwarf
Battleragers were a type of dwarf warrior whose combat style relied on raw instinct, anger, and physical strength. The individuals who practiced this type of fighting were usually mentally unstable with a low life expectancy.[4]
“
If it moves, kill it.
”
— Battlerager maxim[4]

Despite this simple attitude, battleragers were a key element of dwarven warfare. Their almost-suicidal style allowed more strategic fighters to plan and execute more complex techniques, on already worn-down enemies.[4]

The close-combat battlerager style meant that all dwarves who practiced it must be immensely strong and durable. Battleragers usually focused only on what they needed to fight and survive; this led to individuals with poor personal hygeine.[citation needed]

Battlerager armor was usually thick and spiked. This armor is incorporated into the fighting style of the battlerager. Most battleragers cover their entire bodies in tattoos and symbols, any skin left bare will be covered in war paint before battle.[4]

Battleragers were known as kuldjargh in their native Dwarvish, which literally translated to axe idiot.[4]

Battleragers worshiped the dwarven gods of war and many believed they channeled their god's spirit in battle. Battleragers were also under the impression that if they died in battle, their gods would resurrect them with increased strength. These beliefs allowed battleragers to fully immerse themselves into combat, as they had no fear of death.[4]

The infamous battlerager fighting style relied on individuals immersing themselves completely into battle, relying only on instinct and aggression.[4]

Once in battle, these dwarves became almost animal-like, their eyes bulged, their teeth ground, and drool flicked from their mouths and beards. Battleragers were taught to use their whole bodies in combat, incorporating their spiked armor, which allowed them to deal fatal blows with a barge, kick, or even headbutt.[4]

Some guilds of battleragers took to riding dire wolves into battle.[5]

Battleragers were formed into guilds. These small groups were very exclusive and members lived on the outskirts of dwarf settlements.[4]

Although considered brave by their kin, most battleragers were outcasts, rarely engaging in conversation with other dwarves. Children were kept away from battleragers, owing to their aggressive nature and short temper.[4] 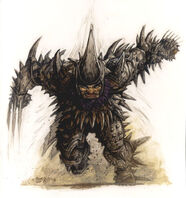 The fearsome leader of the Gutbusters.

A typical battlerager in battle.
Add a photo to this gallery

Retrieved from "https://forgottenrealms.fandom.com/wiki/Battlerager?oldid=579064"
Community content is available under CC-BY-SA unless otherwise noted.