Over 4,000 lb (1,800 kg)[2]
Bebiliths, (pronounced: /ˈbɛbɪlɪθ/ BEH-bil-ith[4]) otherwise known as barbed horrors or creepers of the Abyss, were arachnid demons that, for their own inscrutable reasons, preyed upon other demons. Their kind often roamed the Abyss unimpeded, as their strange mystique caused other demons to leave them alone.[3]
“
Long we live and long we weave
Till we have filled this space.
Then, as before, we will leave
To hunt another place.
Our task ends when the weak are gone.
Then fill new spaces with our spawn!
”
— One bebilith to another[3]

Bebiliths looked like massive, misshapen spiders, with a body the size of a plow horse and legs stretching some 14 feet (4.3 meters). Their tough, chitinous exoskeleton was mottled in coloration, camouflaging their 2 tons (1,800 kilograms) of mass.[2] Their two forelegs ended in razor sharp barbs, and their fangs dripped globs of odorous liquid. They were seemingly incapable of speech, conducting all their communication in silent telepathy.[3]

While some accounts of bebilith behavior claimed they hunted other demons for the fun of it, others purported that they were punishing them.[1] Their targeting system was inexplicable and once they decided on a group to exterminate they would not stop until its utter obliteration, pursuing their targets with cruel, unwavering focus. Exactly how a tanar'ri, one of the cruelest and most unpredictable beings in the multiverse, drew their ire was also unknown.[3] While not stupid, their intellects were limited, furthering the incomprehensibility of their actions.[1]

Bebiliths had a strange connection with fire, as their webs were resistant, if not on fire when they spun them. After victims died from their venomous bite they had to be quickly blessed to prevent the corpse from bursting into flames.[3]

A bebilith's foreleg claws were used to penetrate and rip armor plating from their foes and their strong sense of smell let them track their foes with ease. Their venom was highly perishable and quickly became inert when it touched the air. Bebiliths could fire up to 4 webs every day and manipulated them with ease to prevent their foes from escaping.[2] Their other mysterious link was to the Astral Plane, the place they were most likely to plane shift to.[3]

Despite favoring demonic prey, bebiliths would hunt any that was available, attacking them on sight. Normally they attempted to attack a single target while using their webs to cut them off from their companions.[2] They remained in near constant motion, slowing their enemies with webbing.[2] If overwhelmed during combat they first tried to bite their enemies before retreating, hoping their poison would finish the job.[2] Retreat was normally done through plane shifting to the Astral Plane, and some reports claimed they tried to pull their opponents in with them. However, it was not within a bebilith's power to prevent a foe's escape after entering the plane through similar magic.[3]

It was not uncommon for bebiliths to be seen serving Lolth, who was fond of the arachnid demons. They were often found among the other denizens of the Demonweb Pits and were summoned by drow to act as destruction engines or guardians.[1]

Even though many demons within the Abyss could easily kill a bebilith, few actually did. Killing a bebilith was taboo and some great demonic beings even paid them homage. It was proposed that bebiliths had an aura marked by some as feelings of melancholy and futility, although this was possibly just due to their fearsome visage. This was proposed as an explanation partially because demons seemingly recognized bebiliths by means other than the conventional senses of sight and sound, meaning only a skilled illusionist could truly copy one. A traveler trying to use the taboo against demon-kind would need either a highly capable magician, or to escape into a bebilith's territory while escaping the bebilith itself.[3]

Information on bebiliths was hard to come by as most who came across them didn't manage to stay alive long enough to record it.[3] They were purported to originate from the realm of the Spider Queen Lolth.[1]

Many mages and alchemists had for whatever unproven reason come to the conclusion that their spinnerets could be used in powerful binding magic, with some paying thousands of gold for those who could reacquire them.[3] When the alchemist Brahmadatta attempted to craft a magical net that could contain any entity, he decided that bebilith silk would be the secret ingredient. He wrote his experiences to his old friend Vimalanda, how he stalked a bebilith for approximately two months before drugging it and cutting off three spinnerets. Three months afterwards, Vimalanda went to visit Brahmadatta only to find that his city of Ind had been burnt to the ground by the bebilith. Vimalanda claimed he could feel the spirits of the city's dead flying through the webs, and even after the land was cleared nothing grew where it once stood.[3]

A bebilith on its web. 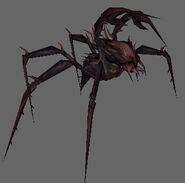 A bebilith as it appears in the Neverwinter Nights game editor.