Eye rays
Charm Monster
Flight
A beholder, sometimes called a sphere of many eyes or an eye tyrant, was a large aberration normally found in the Underdark. These large, orb-shaped beings had ten eyestalks and one central eye, each containing powerful magic. Powerful and intelligent, beholders were among the greatest threats to the world.[7]
“
Think ye weave cunning schemes and elaborate intrigues with fallback plans and positions? Beholders change, refine, discard, and spin anew scores of such plans all the time. To the average beholder, human intrigues are the fumbling of babies.
”
— Elminster's notes in Volo's Guide to Monsters.[8]

Beholders were immediately identifiable, being essentially a floating head with one single, cyclops-like eye surrounded by ten smaller eye stalks. Other than this, the main feature of a beholder's anatomy was its massive, gaping maw. Because of these features, beholders were occasionally known as "spheres of many eyes" or "eye tyrants,"[7] although the latter also referred to a specific type of beholder.[2]

Because their entire body was covered in eyes, beholders had the capacity to see in all directions at once, making it nearly impossible to ambush them while also giving them an unusually high degree of perceptive ability. Although beholders lacked the capacity to see color, they had the ability to perceive even in the most darkened environment, under conditions in which a human or similar creature would be rendered blind.[7]

Beholders were also capable of flight, in spite of their lack of wings or similar physical features, simply hovering above ground effortlessly. The effects of this flight resembled those of the wizard spell levitation.[7]

Xenophobic and vicious creatures, beholders were quick to attack enemies, including anyone they deemed not "like themselves." Beholders, as a rule, were violent and greedy, hungering for both wealth and power over others. This was made all the more complicated since more than one variety of beholder existed, each believing itself to be the pinnacle of bodily perfection and they viewed other beholders who differed from this image in even the most minute details as loathsome enemies and inferiors.[7]

Beholder minds were divided into two separate entities. Each of these entities thought and acted on its own accord even though it was bound to the same body as the other half of its mind. Neither half of the beholder's mind trusted the other, so they hid a lot from each other, creating a very paranoid relationship. "Sane beholders" were beholders whose minds were not "divided" so to speak. They were still two entities within the beholder, but neither hid anything from the other, making a less paranoid beholder. However, the persona of a "sane beholder" was just as likely to be considered "insane" by any non-beholder. Because there were two entities within a single beholder, that beholder should always be addressed by its full name when in conversation with them, or they would perceive it as speaking to only one of the entities.[9]

Beholders were not particularly strong but were inherently magical creatures, with each of their eyes possessing an innately magical nature. Beholders, who often attacked for seemingly no reason, would often try to end a battle as quickly as possible, unleashing their terrifying abilities all at once. Among the most basic of these attacks was their deadly ability to project magical power from their eyes, in varying forms such as instilling fear within, charming, knocking out, petrifying, disintegrating, slowing, or killing their enemies.[7] Any combination of these was possible, although they often used only two at a given time.[2]

Many, but not all, beholders also had the capacity to use their central eye to project a field of antimagic, which canceled the effects of all supernatural abilities within a small cone of 150 feet in length. In addition to enemy spells, prayers, or similar effects, this also affected a beholder's own eye rays, suppressing their power. However, the inability to cast its eye rays at full strength was hardly a hindrance—it allowed a beholder to attack its foes with its large, toothy maw.[7]

Beholders were often found occupying deep, underground caverns. Frequently, these lairs were carved out by the beholders themselves, using their eye rays to mold the environment for their purposes. Often, these lairs were built vertically rather than horizontally like most buildings, with beholder architecture frequently exhibiting a large number of vertical shafts which beholders and other flying creatures could use with ease, while walking creatures found their navigation hindered. [7] Beholders worshiped Gzemnid[10] and the Great Mother.[11]

In spite of their hatred of diversity (or perhaps because of it), beholders came in a variety of forms, some of which are listed below:

Bloodkiss beholder
An undead beholder that sucked its prey dry of blood with its eye tentacles.[12]
Death tyrant
Death tyrants were undead beholders akin to zombies.[13]
Elder orb
These beholders were born with amazing longevity, to near-immortality.[14]
Eye of flame
An unusually docile form of beholder whose members, while still malevolent, were willing to serve beneath more powerful beholders.[2]
Eye of frost
A cruel beholder who lived in solitude.[15]
Eye of Shadow
Eyes of shadow are beholders that have been warped by too much time spent in the tangled paths leading to the Shadowfell.[16]
Ghost Beholder
A beholder that has died and has risen as a ghost.[17]
Hive mother
Also known as ultimate tyrant, an enormously powerful variant of beholder with the capacity to stun nearby enemies as well as a greater range of eye ray abilities. Hive mothers had the ability to magically dominate other beholders.[18][19]

A vast number of beholderkin existed. Not true beholders, these creatures did not share the race's xenophobia, although most were still quite evil and cruel in nature.

Death kiss
This creature's eyestalks were replaced with blood-draining tentacles.[20]
Director
Beholder hive shock troopers.[21]
Eye of the deep
An aquatic subspecies of beholder. Its most notable physical change was its two large clawed arms.[22]
Gauth
A subspecies of beholder from the same plane as spectators which fed on magic and magic objects.[23]
Gazer
Also known as eyeball, a tiny beholderkin with four eye stalks.[24]
Gouger
Ruthless carnivores that hunted beholders.[25]
Observer
An observer was one of the most socially adept of the beholder family.[26]
Overseer
An overseer resembled a large, fleshy tree with mouths on its trunk and eyes on its branches.[27]
Spectator
A spectator was an extraplanar beholderkin with four eye stalks.[28]

Beholder hide was a very rare and high quality crafting material, used in creation of armor and reinforcing weapons.[29]

The goblin boss Yek kept a stuffed beholder in his treasure chamber on the Arcane Chambers level in Undermountain.[30]

A beholder from the game editor of Neverwinter Nights. 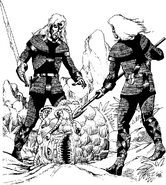 Illustration of two drow standing over a defeated beholder. 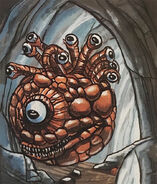 A happy beholder, moving to greet its guests.
Add a photo to this gallery