Lawful evil
Belhifet, who operated under the alias of Poquelin, was a powerful devil from the plane of Avernus in the Nine Hells.[1][2][note 1]
“
...all will have ben made ready for your arrival. Those who still live will be baptized in the blood of those sacrificed in your name. A million souls will hold their arms up and scream your name, ready to embrace their new lord and master.
”
— Hephernaan, communing with Belhifet at an altar.[2]

He appeared as a massive, red-skinned fiend that towered over most humanoids.[1][2]

Belhifet conducted himself in a more refined manner that contradicted his horrifying nature and actions.[2]

Belhifet was seemingly unmatched in his ability to deceive and manipulate mortals of the Realms. He readily misled and outmaneuvered his both opponents and those he treated as pawns in his schemes.[1][2]

While in his domain on Avernus, Belhifet could rain down hellfire upon his foes and readily teleport himself, erupting in a terrific conflagration.[2]

As a powerful baatezu, Belhifet possessed an inherent protection form all forms of physical harm and could only be hurt by weapons possessing a strong +3 enchantment.[2]

The great fiend carried two massive blades, that he wielded with absolute savagery when he chose to engage his foes in physical combat.[1][2]

Throughout his existence, Belhifet was seemingly always driven by his pride. He spent centuries waging war against a single opponent, then sought revenge on his own home plane of existence after suffering banishment.[1]

Belhifet had an ages-old feud with the being Yxunomei, a marilith from the Abyss. The two adversaries waged a war with one another so profound that it led to Belhifet's banishment from the Nine Hells.[1]

During his campaign against the Ten Towns in the late 13th century DR, Belhifet committed great acts of evil, impregnating many mortal human and elven women with his spawn and seducing a band of lieutenants to serve his unholy cause. Among his most fervent devotees were the renegade elf Ilmadia Bariel, the drow sorcerer Malavon Despana, a bandit called Marketh, and Saablic Tan, a Red Wizard of Thay.[1][4]

Belhifet took Ilmadia as his concubine and sired twin cambion offspring, Isair and Madae. The half-fiends carried on their fiendish father's legacy by bringing chaos and destruction unto the frozen lands of the Far North, in their case under the banner of the Godson Iyachtu Xvim.[4]

The powerful devil was served by a number of lesser fiends, who acted as agents on the Prime and defenders of the Basalt Tower, his domain in Avernus. One of Belhifet's red abishai took on the guise Revered Brother Hephernaan to serve as the infernal advisor to the Shining Lady, a part-celestial military leader who was manipulated to be one of the devil's assets. An opportunistic cornugon by the name of Thrix the Profane that served as gatekeeper to Belhifet's tower.[2]

“
I shall tell you of such a tale. It is a tale quite familiar to me, for I have spent nearly a lifetime piecing it together and chronicling it here, within this book...Perhaps now in the telling of it, I shall at last find the answers I seek.
”
— Belhifet, narrating the story of his time in the Realms.[1]

For millennia, Belhifet waged his war of vendetta against the tanar'ri Yxunomei, with little care for anything but his own victory. Believing the conflict could get out of their control, the devil's superiors in the infernal hierarchy banished him to the planet Toril in the far north. While stuck in the icy wasteland, circa the Year of the Cold Soul, 1281 DR, Belhifet began to plot his revenge when he was contacted by a malevolent sentience far more ancient than the devil himself. It came from the remnants an artifact that possessed similarly-align goals, that was also lost in the frigid north, the Crenshinibon.[1]

With the influence of the artifact in his mind, Belhifet schemed to raise himself a new infernal army drawn from the Nine Hells of Baator. He planned to utilize a deactivated portal to the Hells found in Icewind Dale, which had been sealed within the monument of Jerrod's stone, and secluded away inside the temple of Tempus in Easthaven. Rallying an army of monstrous creatures of the North and shattering the stone would grant Belhifet the army he sought and grant him entrance back into Avernus.[1]

Disguising himself as a cleric of Ilmater named "Poquelin" and drew forth followers from an Ilmatari monastery led by Brother Perdiem. Warping the minds of his new devotees and turning them into undead minions, Brother Poquelin formed his black temple in an abandoned dwarven temple of Berronar Truesilver in Dorn's Deep and used the power of the Crenshinibon to recruit the monstrous army of goblinoids, orcs and giants needed to conquer the North. While operating from Dorn's Deep, Belhifet quickly discovered that Yxunomei had followed him to Toril after his exile, mustering an army of yuan-ti in the fortress of Dragon's Eye within the Spine of the World mountains to destroy her arch-nemesis.[1]

“
I am the beginning and the end of this story. I and only I will determine how it plays out.
”
— Belhifet, to the Heroes of the Ten-Towns.[1]

To stall Yxunomei, Belhifet used the Crenshinibon to freeze over the trails the led to the Ten Towns of Icewind Dale and enlisted Kreg Frostbeard and his frost giants to bring down avalanches to slay locals that tried to investigate the goings-on. Unfortunately, Yxunomei's activities attracted the attention of a band of meddling adventurers, who ventured into Dragon's Eye and struck down the demon from Toril, sending her back to the Abyss from which she came. Investigating into the matters at hand, the adventurers uncovered Belhifet's plot and confronted Brother Poquelin in Dorn's Deep.[1]

Using the power of the Crenshinibon once again, Poquelin formed the Cryshal-Tirith around the temple of Tempus in Easthaven, securing Jerrod's stone.[1]

Eventually reaching Dorn's Deep, the adventurers managed to reach Belhifet and confront him. Belhifet managed to flee and, in the process, capture Easthaven in preparation for opening the gate to Baator. Belhifet also used Crenshinibon to seal the temple of Tempus in Cryshal-Tirith. However, the heroes managed to penetrate the crystal tower surrounding the temple and defeat Belhifet before the gate was opened. Belhifet was banished to Baator, not killed. He would not be able to walk Faerûn again for another hundred years.[1]

“
As for the vanquished Belhifet, defeated on the Prime, he was banished back to the depths of Hell, where he languished for a period of a hundred years, tormented by the memory of his mistakes, and waiting for the day he would return to Faerûn and exact his revenge.
”
— The end of Belhifet's story.[1]

About thirty years later, circa the Year of Storms, 1310 DR, the legacy of Belhifet continued made its way to the Realms once again. His bastard half-fiend children Isair and Madae formed the Legion of the Chimera, wreaking havoc across Icewind Dale. Later in their lives, they joined Belhifet in the Blood War.[4]

Despite his previous desire to gain revenge on the Hells for his exile to the mortal realm,[1] over time Belhifet came to see Avernus as his prison. He awaited his return to the Prime with great impatience, scheming to make his return sooner rather than later.[2]

After nearly a century returned to Avernus, Belhifet was provided with a second opportunity to wield his hellish army in the Realms. When the young Waterdhavian aasimar Caelar Argent foolishly read along from the Tome of the Nine she inadvertently placed herself under Belhifet's subjugation in Avernus, causing her uncle Aun to offer his own soul in place of hers. When Belhifet appeared to the adult Caelar years later in the Year of the Banner, 1368 DR, and offered her a chance to free her uncle, the paladin from from House Argent readily accepted.[2]

Caelar's appeared before the people of the Sword Coast as the Shining lady, a charismatic leader that would help them win back the souls of their loved ones lost in the first and second Dragonspear Wars. With guidance from her trusted advisor Hephernaan, the abishai servant of Belhifet, Caelar formed the Shining Crusade, a holy army that marched on Dragonspear Castle and drew the attention of the Bhaalspawn hero Abdel Adrian. Using the god-child's own blood, Caelar opened up the portal to Avernus beneath Dragonspear Castle, giving Belhifet access to the Realms once again.[2]

While he managed to unchain his horde of devils through the portal on the Sword Coast as he had done over a century earlier in Icewind Dale, Caelar Argent and the company of adventurers led by Abdel Adrian ventured into Avernus and assailed the Basalt Tower itself. Finally confronted within his home plane of existence, Belhifet wielded the entirety of his infernal power against his those that dared get in his way. He unleashed his devils upon the intruding mortals and struck them down with hellfire in a great battle on the roof of the Basalt Tower. While Caelar Argent's ultimate fate was unknown, Belhifet was struck down by the heroes in his own domain. Like all devils, once Belhifet was slain within the Nine Hells his last defeat led to final death.[2]

Behind the Scenes[edit | edit source]

The voice actor for Belhifet in Icewind Dale and Baldur's Gate: Siege of Dragonspear was David Ogden Stiers. 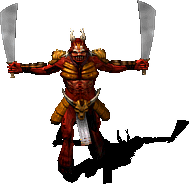 Belhifet's sprite from the Icewind Dale video game.
Add a photo to this gallery

Retrieved from "https://forgottenrealms.fandom.com/wiki/Belhifet?oldid=661368"
Community content is available under CC-BY-SA unless otherwise noted.