The Sword Coast and Western Heartlands

Beregost (pronounced: /ˈbɛɑːrɛgoʊst/ BEAR-eh-gost[1]) was a town on the Coast Way, halfway between Baldur's Gate and Amn. It was a popular stop for many visiting merchant caravans, especially those en route to Waterdeep in the north or to the Sea of Fallen Stars in the east.[3]

In 1368 DR while Beregost's offical government was a five-person town council, in reality, the town was run by the governor, Kelddath Ormlyr, who is also the high priest of Song of the Morning a major temple to Lathander.[3] By 1372 DR, Beregost was recorded as having no "official government", though Most Radiant Ormlyr was still in charge.[2] It was policed by the guards from the temple,[3] as well as Flaming Fist from Baldur's Gate.[citation needed]

Beregost began as a small farming village, established some time after 1026 DR to support the school of magic run by the wizard Ulcaster, on the opposite side of the Coast Way.[4][3] The school was destroyed in 1106 DR by Calishite mages and only the ruins remained.[5][2] Tales of ghosts that haunted the school's ruins caused the town to develop further on the west side of the Coast Way, leaving the hills east open for livestock.[3]

Despite the loss of the school, and the worldly travelers it could bring, the settlement of Beregost thrived, growing into a large town and an important trading center.[6]

Song of the Morning
This temple of Lathander dominated Beregost in terms of influence upon its citizens.[3]

Feldepost's Inn
An old and comfortable inn, popular among the elderly.[8]
The Red Sheaf
The largest inn in Beregost, known for its fast service. The Sheaf offered no entertainment and was favored by merchants who wants to hold quiet businesses meetings.[9]
The Jovial Juggler
Part inn, part dancing and drinking club, the Jovial Juggler was favorite among the young people of Beregost.[9]
The Burning Wizard
A bustling tavern that just as popular among visitors as it was with the locals. 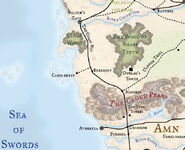 The icon of Beregost, and the neighbouring temple, from Baldur's Gate (game)
Add a photo to this gallery

Retrieved from "https://forgottenrealms.fandom.com/wiki/Beregost?oldid=426022"
Community content is available under CC-BY-SA unless otherwise noted.