The Black Flame Zealots, also known as the Order of The Black Flame, was a secret society of assassins who drew their power from the passions of anger and rage. They were originally only disciples of Kossuth, but their ardent practices have since inspired devotees of other worships to follow in the footsteps of the Black Flame Zealot. They served as the eyes, ears, and hands of Kossuth in Thay. They operated heavily before the Spellplague, and not even the mighty Zulkir were out of their reach. Since the Spellplague, the order has gone silent. However, there is some speculation of small sects working out of Amruthar. 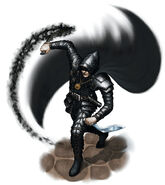 Seith a black flame zealot!
Add a photo to this gallery

Retrieved from "https://forgottenrealms.fandom.com/wiki/Black_Flame_Zealots?oldid=519618"
Community content is available under CC-BY-SA unless otherwise noted.