Animal
Blade spiders were a type of monstrously sized spider that emerged in the Realms following the Spellplague.[1]

These creatures had red fur and blade-like appendages at the end of each of their limbs, including their pedipalps.[1]

The blade-like appendages of these creatures were laced with a type of poison.[1]

Around the late 15th century DR, blade spiders could be found in the pit fights conducted by the Gray Wolf tribe in Vellosk.[2] Around the same time, Doomguide Volahk recovered a map from Jack's laboratory and deciphered the location of a Thayan compound known as the Menagerie within the Neverwinter Wood. There, Red Wizards performed unholy experiments on various creatures, including blade spiders. The hidden enclave was posing active danger to the city of Neverwinter, and eventually, a group of heroes stopped the twisted experimentations.[3]

Blade spiders were typically known to lurk under thick foliage or in crevices, pits, or bolt-holes in floors of caverns.[1]

These creatures could be found in the Underdark.[1]

Blade spiders were a favored pet of drow and some creatures were known to use them as mounts.[1]

The driders of the drow city of Tel Verinal, deep beneath the western end of the Moonsea, were known to command small packs of obedient blade spiders.[5]

A blade spider, as depicted in the video game Neverwinter. 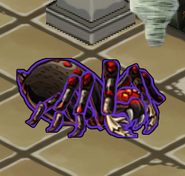 A blade spider, experimented upon by Thayan Red Wizards.