Edit
This article is about the plant creature. For the spell, see Blight (spell).

green (vine) and brown (twig & needle)
A blight was a plant-based creature.[1]

Blights were plants that had been tainted with evil, usually after a forest was corrupted by an evil force. They resembled dead versions of their original plants. The first blights were spawned when the vampire Gulthias was stabbed with a stake. The stake turned into a sapling which grew into a tree. This tree released seeds from which the first blights emerged.[1] 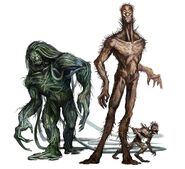 A group of blights.