A blink dog was a mysterious, intelligent canine creature. Most blink dogs had yellow-brown fur and large ears. They were well known for their ability to blink—a supernatural teleportation ability.[2]

Blink dogs had an average intelligence. They had powerful senses, including the ability to see in low light and see in the dark, as well as possessing acute scent detection and tracking.[2]

A blink dog's most well-known ability was its ability to blink, as well as use dimension door.[2]

Blink dogs spoke their own language.[2] They had a long hatred of displacer beasts, and would attack them on sight.[1] 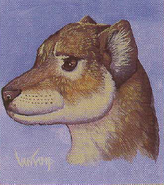 A portrait of a blink dog.
Add a photo to this gallery

Retrieved from "https://forgottenrealms.fandom.com/wiki/Blink_dog?oldid=557280"
Community content is available under CC-BY-SA unless otherwise noted.