This article is about the in-universe conflict. For the card game, see Blood Wars.

The Blood War was an ancient conflict that raged between the fiends of the Lower planes.[5] The two main sides of the war were the demons, inhabitants of the evil plane of chaos of the Abyss, and devils, representing the equally evil but lawful realm of the Nine Hells. Neutral evil yugoloths played both sides against one another.[2] The Blood War had raged on since the Age Before Ages, a dark time when the Prime Material Plane had not fully developed. The conflict was massive, spanning entire planes of reality, and hosting an almost infinite number of fiends.[6][2]

The main site of the majority of conflicts pertaining the Blood War was Avernus, the first layer of the Nine Hells.[7] Demonic forces sailed the River Styx into the layer and were repelled by diabolic legions that brought reinforcements from the lower layers of the Hells. The conflict, however, often did not remain confined to Avernus, as destructive skirmishes emerged anywhere in the multiverse where demons and devils could gain access to.[2]

Another important battlefield of the Blood War was Oinos, the first layer of Hades. Battles occasionally leaked to the deeper layers of Niflheim and Pluton.[1]

In the demonic front, Pazunia was one of the primary battlegrounds. Devils often attempted to conquer the first layer of the Abyss in the hope of controlling the entire plane.[8]

“
O jubilant flames!
O redolent blood!
My heart burns
Not from pain, but pride!
”
— Excerpt from a baatezu battle song[9]

The cause of the Blood War was unknown, but most believed it to be a remnant of the great war of Law against Chaos waged by the Wind Dukes of Aaqa against the forces of the Queen of Chaos.[6] The yugoloths liked to entertain the notion that the War was their own personal experiment into the nature of evil, one which they created and would ultimately end on their own terms.[10] Of course the other fiends had their own notions about the war, colored by their particular alignments and racial propaganda. Some demons and devils seemed to believe that their respective races could actually gain control over the other. However, the most powerful archdukes of the Hells and the most cunning princes of the Abyss paid the Blood War little concern, and if entities as ancient and formidable as them seemed unconcerned, then the cause would most likely be a fruitless one.[citation needed] Some philosophers speculated the Sigil's Lady of Pain had something to do with the Blood War, but what connection she actually had was not clear.[11]

Many lesser fiends actually embraced the War, for it staved away the cosmic boredom of being ageless. A few races survived on the carnage the Blood War produced; the armanites, centaur-like tanar'ri, must constantly battle with other creatures, for otherwise they would turn on one another; the molydei were another race of demons who prowled the Abyss, searching for deserters or rogue demons, whom they press-ganged into fighting. Certain creatures were bred by other fiends exclusively for the Blood War, including the Nessian warhounds and the milvorn. Even the yugoloths were given purpose by the Blood War; forever shifting from one side to the other, they as a race gained much of their wealth and power from the spoils of war and the high price of their services, though some (including the yugoloths themselves) believed this to be simply a facade over older and darker motivations.[citation needed]

Some sages dictated that the Blood War was a simple offshoot of the primordial wars between law and chaos. The lawful good-aligned archons and chaotic good aligned eladrins only marginally participated in the conflict, mostly ensuring that the battle remained confined to the lower planes.[12] The demons and devils (in keeping with their sadistic and violent natures) simply would not cease their fight, even after the rest of the multiverse had grown more tolerant.[6]

Despite millennia after millennia of constant strife, no side had been able to gain even a definitive, permanent advantage over the other. Despite their vast differences, the tanar'ri and the baatezu were surprisingly balanced combatants. The chaotic denizens of the Abyss, while far more numerous than the devils, were, true to their alignment, constantly warring amongst themselves. They could contest the might of the Nine Hells only through sheer individual power, and their seemingly limitless, if unorganized and uncoordinated supply of warriors. The baatezu, on the other hand, deployed smaller numbers onto the field, but their warriors were regimented, well-trained and well-disciplined, all the while making incredible use of their generals' ruthless strategies. This violent balance could have kept the Blood War fueled for an indefinite period of time.

One thing, however, was certain: had one side been able to eliminate all opposition, and thus gain control over the entirety of the Lower Planes, the multiverse as a whole would have been in great danger. With no enemies left in the Lower Planes, the fiendish rulers could then have turned their attentions towards other worlds and planes, and it was likely that no force could hope to stop them. Even the celestial beings of the Upper Planes, formidable as they were, could face destruction at the hands of the tanar'ri or the baatezu, weighed down by their alignments demand by the needs of good and justice—the fiends, having no such compunctions or scruples, could easily have used the celestials' morality against them. In the past, agents of the heavenly races had even planted powerful weapons or artifacts among the ranks of the demons or the devils. This appeared to be a reliable indicator that even the beings of the Upper Planes did not want the war to end.[2]

There was a prophecy that said that the Blood War would end when the Crawling City, a city on the plane of Gehenna that was home to millions of yugoloths, directly entered the Blood War.[13]

However, once Asmodeus regained his divinity by absorbing the divine power of Azuth, he professedly ended the Blood War by pushing the Abyss to the bottom of the Elemental Chaos in the World Axis cosmology.[14]

Thus, for the inhabitants of Realmspace, the seemingly eternal Blood War finally came to an end at the hands of the deified archdevil Asmodeous, with the devils thus victorious in a manner of speaking.[14] However, this apparent victory was regarded across the multiverse as no more than an uneasy truce. Demons, scattered and consumed by infighting, could not muster the strength to resume the conflict, whereas devils kept themselves busy with strengthening their own realms, aware that an assault on the Abyss could be the pretext to unify the demon lords against them.[15]

In fact, observers across the multiverse reported that the conflict continued elsewhere, as both forces were forever kept in check and balanced despite temporary advances or apparent victories from either side.[2]

Restart of the hostilities[edit | edit source]

Despite Asmodeus' claims, the denizens of the Nine Hells knew that throwing the Abyss into the Elemental Chaos did not stop the Blood War, only stalled it for a time. By 1486 DR, the demons had mustered enough forces that many devils feared the war would restart while Asmodeus was indisposed, dealing with the Second Sundering.[16]

The Blood War officially was restarted in Toril during the First Tymanther-Unther War.[17] While on the world of Abeir, the god-king Gilgeam contacted the demon lord Graz'zt and asked him to aid Unther in their war against the genasi forces of Shyr.[18] On Nightal 26, Unther was returned to Toril as part of the Second Sundering, and Gilgeam immediately moved against Tymanther to reclaim the former lands of Unther from the dragonborn.[19]

On Hammer 10 of 1487 DR, the forces of Gilgeam laid siege to Djerad Thymar while the Chosen of the gods Asmodeus and Azuth conducted a ritual on the city in order to make both gods separate entities again.[20] To maintain her position in the Nine Hells, Glasya sent the Malbolgean forces, led by a pit fiend named Khartach, to help the Thymari against the demons, helping the Chosen to accomplish their goal,[21] and reigniting the Blood War on Toril.[17]

The Dark Eight were a coven of pit fiend generals who resided in the Ninth Layer of Hell, Nessus. They plotted and strategized the movements of Hell's armies.[22] The pit fiend Bel was once a mighty leader on the battlefields of the War, and used his influence with the Dark Eight to oust Zariel and gain control of Avernus.[23] He remained Lord of the First until he in turn was ousted by Zariel, becoming reduced to her lieutenant.[24]

Baltazo, a grotesque minor Demon lord, was also a mighty general in the Blood War, but had since retired to the Plain of Infinite Portals.[25]

Interestingly, the greatest powers of the Nine Hells and the Abyss did not take an active role in the Blood War.[7][6] The sole exception from Baator was Bel, Lord of Avernus. The mighty pit fiend had strong ties to the Dark Eight, the pit fiend generals who oversaw all of Hell's involvement in the War; this relationship kept the relatively weak Bel safe from the other archdukes.[26] The mightiest demon princes, such as Orcus, Graz'zt, and Demogorgon, were constantly at war with each other within the Abyss, and had little concern for the Nine Hells. Asmodeus himself built a mighty force of devils within his fortress of Malsheem in wait of a cataclysmic battle he claimed would dwarf the Blood War. 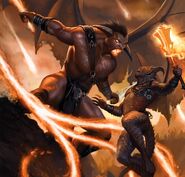 A balor and a pit fiend dueling.

A legion of devils comes across an infighting demon mob.
Add a photo to this gallery

Retrieved from "https://forgottenrealms.fandom.com/wiki/Blood_War?oldid=611324"
Community content is available under CC-BY-SA unless otherwise noted.