Edit
This article is about the dragon. For the boat, see Blue Dragon (boat).

Deserts
Blue dragons, also known as storm dragons,[6] were orderly creatures and are unusual for chromatics in that they keep fairly well-ordered, hierarchical societies. They were more likely to be mocking and manipulative than outrightly cruel or murderous to 'lesser' creatures, aided greatly by their natural talents for hallucination. They were infamous for tricking desert travelers into drinking sand or going miles out of their way to avoid nonexistent dust basins. Their breath weapon was a line of lightning or a large electrical discharge.

Blue dragons were physically distinguished by the single large horn protruding from their heads and also by their ears, which were rather large and frilled. The tail is thick and bumpy, like that of a crocodile. The wings are more pronounced than most other species'. They smelled like electricity or sand.

The blue dragon excelled at aerial combat, perhaps more so than any other species of dragon. Their lightning discharges were very easy to aim at other aerial foes, or at creatures below them on the ground. They were also extremely adept at burrowing in sand, and often lie in wait just below the surface of the desert for prey. When they were so burrowed, their large horns could easily be mistaken for pointed desert rocks.

Blue dragons were native to arid wastelands and deserts. They made their lairs in underground caves; easily accessible to the dragons, as they could burrow through the ground. These dragons would fly above their territory, using the bleak landscape and its sparse terrain features as their best chance of spotting opponents. The typical blue dragon lair was dug into one of the towering rock formations that dominate desert landscapes. As with all dragon lairs, the blue dragon's lair would have two entrances: one at ground level and hidden by the sand, and one opening onto a high ledge on which it could perch and survey its territory. Each lair also had a large subterranean cavern with a large pool of water and a sandy beach, which its inhabitant would use for drinking and relaxation.

Despite their evil nature, blue dragons were actually excellent parents to their young, and would rarely leave their eggs unattended. Blue dragon eggs must be buried in warm sand to incubate. Blue wyrmlings were actually quite cute, but they were quick to taunt any other creature, and even quicker to hunt small desert creatures for food.

A blue dragon as depicted in Advanced Dungeons & Dragons comics. 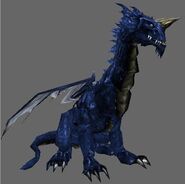 A majestic blue dragon in the Neverwinter Nights game editor.

An elder blue dragon from the "Lords of Madness" D&D miniatures set.

A blue dragon from the game editor of Neverwinter Nights 2.

An efreeti and a blue dragon in the City of Brass, from the cover of Dungeon #174. 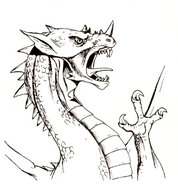 A blue dragon from 2nd edition.