Chaotic evil
Bodhi was an exiled elf from Suldanessellar who was later transformed into a vampire.[note 1] She and her "sibling" of "the Exile" Joneleth Irenicus orchestrated a grand scheme to steal the divine essence of the dead god Bhaal, and take revenge on their former homeland.[1]

Bodhi was exceptionally cruel, sadistic, and evil, delighting in playing with her "prey" before their destruction. She believed that being undead gave her a supernatural focus and stimulated her curiosity. Bodhi developed an intense interest in those abilities held by inherently powerful beings.[1]

Like Irenicus, she held a deep hatred for the elven community she was born into and later exiled from. She thought them to be the epitome of arrogance and pride. Unlike him she did not suffer a dispassionate existence, rather she gained pleasure in the pain of others.[1]

As a vampire, Bodhi possessed great strength and ferocity, even more so than others her kind. With the soul of a Bhaalspawn infused into her, she grew even stronger. Her physical abilities were truly formidable, and she was fearsome in close combat. She was capable of draining the lifeforce of any being she struck with her claws.[1]

Similarly, she suffered the same disadvantages such as an intense aversion to sunlight. Interestingly enough, she even suffered from some form of sea sickness.[1]

Over time Bodhi had collected a number of tomes that detailed vampirism, including: Dea Vampir Becomos, Conjur Ota Serevanta, and the unabridged version of The Vampiricus Omnibus.[1]

Bodhi led a vampiric thieves guild that operated in an underground lair located beneath the Grave District of Athkatla. Her group of thieves competed against the famous Shadow Thieves guilds who operated all across the nation of Amn. During the conflict, she abducted scores of subjects that were held for use in Irenicus' experiments.[1]

She had an extremely unhealthy relationship with her "sibling" Irenicus. The two lived their exiled lives devoted to revenge against their former community.[1]

Within her thieves' guild, she had a number of vampire followers. Most notable among them were her right hand Cohn Ta'glaen, Antenos, Valen, and Meredath. They in turn were served by a number of thralls, who were given belittling names such as Chore and Fetch.[1]

Bodhi was born in the elven city of Suldanessellar. She was a popular individual who was closely tied the city's greatest mage, Joneleth Irenicus. Over time she drew Joneleth into her ever-increasing quest for power without consequence. She and Irenicus embarked on campaign to achieve godhood by draining the Tree of Life of its magical essence. The pair were stopped by the elves of the forest and suffered the same punishment. The pair of exiles were cursed, stripped of their connection to the Seldarine and exiled from their home.[1]

Bodhi sought to counteract her cursed state by seeking out undeath. Unfortunately, being turned as a vampire failed to grant her a "life" longer than that of a mere human.[1]

At some point during the mid–14th century DR, Irenicus came up with a plan to steal the divinity of another being to continue with his plan, and take revenge on Queen Ellesime. Bodhi remained with her "brother" and aided him every step of the way. He sought out a number of targets, including the Shining Lady Caelar Argent, in the Year of the Banner, 1368 DR. However he settled on the Bhaalspawn Abdel Adrian, and his half-sister Imoen. The pair were able to abduct the pair and their companions just outside of Baldur's Gate,[2] and imprisoned them beneath Waukeen's Promenade in Athkatla.[1]

When Irenicus' dungeon was assaulted by the Shadow Thieves, Abdel and Imoen gained an opportunity to escape from their cells. Upon reaching the city proper, both Irenicus and Imoen were apprehended by the Cowled Wizards, and taken to the asylum of Spellhold.[1]

Bodhi used her thieves' guild to attract Abdel Adrian and involve him in her war against the Shadow Thieves. While she acted under the pretense of seeking Irenicus' death, in truth she was manipulationg the Bhaalspawn into sailing to isle of Brynnlaw, where Spellhold was located.[note 2]

When Bodhi arrived in Spellhold, Irenicus was able to remove the divine soul of Imoen and bestow Bhaal's essence upon Bodhi. After Abdel entered into the asylum a short time later, Irenicus incapacitated him, carried out his dark rituals once again, and took the same divinity for himself.[1]

Abdel and Imoen were reunited in the labyrinthine dungeon beneath Spellhold, both having been stripped of their souls. Bodhi set them loose in the domain of Dace Sontan for her own amusement, planning to eventually feed on the pair. Unfortunately for Bodhi, when she came upon Abdel in the dungeon, he transformed into the Slayer. This absolutely frightened the vampire, causing her to flee to Irenicus' laboratory.[1]

After Abdel and Imoen led a revolt of the inmates at the asylum, Bodhi and Irenicus fled to the drow city of Ust Natha in the the Underdark. There they formed an agreement with Matron Mother Ardulace Despana, helping orchestrate a drow invasion upon the surface elves in the Forest of Tethir.[note 3]

Bodhi returned to her lair beneath the the Grave District, in possession of the Rhynn Lanthorn. Shortly thereafter, Abdel, Imoen, and their companions stormed her thieves' guild and destroyed many of her undead kin. In a final confrontation, the group slew Bodhi and drove a stake into her weakened body resting within a coffin. Bodhi was permanently destroyed and Bhaal's divine essence was returned to Imoen.[1] 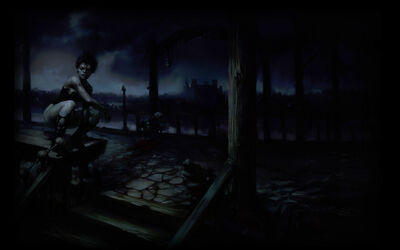 Full-size image of Bodhi from Baldur's Gate II: Enhanced Edition, by Jason Manley
Add a photo to this gallery

Retrieved from "https://forgottenrealms.fandom.com/wiki/Bodhi?oldid=641541"
Community content is available under CC-BY-SA unless otherwise noted.