5 ft (1.5 m)
Bonebats were a skeletal undead created from the bodies of giant bats or several bat skeletons.[1][3] Some sages considered them a type of deep bat.[1]

Bonebats took a malicious delight in killing, though they would never attack other bonebats. If left uncommanded for extended periods of time they would attempt to temporarily leave their master's lair to go kill something. Such flights usually went on until the bonebat had killed at least two creatures, often of their own size or smaller. Out of all creatures a bonebat might encounter, bats were the one thing that they would go out of their way to kill.[3]

Bonebats were eternally bound to their creators, even if they had been slain, and couldn't be controlled by another.[3]

Bonebats were incapable of triggering magical items. However, their creators often wired-on amulets or other protective devices to strengthen them. Like any skeleton they were vulnerable to fire and blunt weaponry.[3][4]

Due to the spells involved in creating them a bonebat possessed infravision out to 120 feet (37 meters) and were capable of seeing invisible creatures within 60 feet (18 meters) of them. They were also immune to all forms of paralyzation.[3][4]

Bonebats always approached their enemies silently. They attacked with a bite that could temporarily paralyze their victim.[1] Being undead servants, the bonebat would obediently fight to the death if ordered to by their masters.[3]

Battlebat
Bonebats that had additional bones grafted on to them for the purposes of combat. Typically claws, talons, stingers, and spurs. Those additional stingers and talons were often laced with poison. Their appearance was largely indistinguishable from that of a standard bonebat.[3][4]

They generally were encountered within the lairs of their masters. Considering the types of creatures and individuals that would create such things, this meant that bonebats were most often found in caverns, evil temples, ruins, and tombs.[3][4]

Bonebats were generally created to serve as guardians, messengers, and even allies in battle. They were most commonly created by Red Wizards, members of the Arcane Brotherhood,[1] worshipers of Kiaransalee,[6] as well as powerful undead such as liches, archliches, and vampires.[1][3][4]

In order to construct a bonebat one first needed to cast the spell Nulathoe's ninemen on their acquired skeleton(s), which creates an invisible membrane of force across the bones that links them and allows for flight. The constructor of a bonebat then needed to cast the spells fly, detect invisibility, infravision, and animate dead. However, it was known that further spells may be required in order to properly train the newly created bonebat.[3][4]

Halls of the High King • The Secret of Spiderhaunt • The Sword of the Dales • The Ruins of Undermountain • Training Ground
Video Games
Baldur's Gate: Siege of Dragonspear • Ravenloft: Strahd's Possession 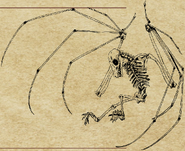 A sketch of a bonebat in the Field Report manual of Baldur's Gate: Siege of Dragonspear. 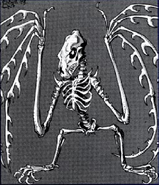 A bonebat, four night hunters, and a sinister, all examples of deep bats.