Hamster
Miniature giant space hamster (allegedly)
Boo was the pet and companion of the Rashemi ranger Minsc, having joined him shortly after he sustained an injury to his head.[1]
“
Go for the eyes, Boo! Go for the eyes!
”
— Minsc[2]

Boo was a fuzzy hamster, though other claimed that he was a miniature giant space hamster. While there was skepticism regarding the claim, Minsc insisted that Boo was, in fact, a space hamster who was intelligent and could converse coherently with him. However, as Minsc was quite addled, it was unclear whether or not his claims were true.[3][4] When he travelled to Barovia, Minsc asked the vistana seer, Madam Eva, about his "space hamster companion", she responded with "the one you call Boo"? This might suggest that she acknowledged Boo as a space hamster, though her response could be seen as the opposite, as she did not directly answer as she did with Minsc's name.[5]

In 1409 DR, a statue honoring Minsc and Boo was commissioned in Baldur's Gate by the merchant Orburt Lewel. The statue, known as the Beloved Ranger, depicted Boo cupped in Minsc's hands. It was a popular landmark and meeting point in the Wide.[6][7] Unbeknownst to anyone at the time, the statue was actually the real Minsc and Boo under the effects of petrification magic.[8]

In 1479 DR, a group of teenagers vandalized the Beloved Ranger statue, breaking off its hands and Boo. The vandals were later apprehended and the statue was fixed.[7]

Sometime in the 1480s DR, the Beloved Ranger was accidentally struck by a wild magic surge caused by the wild mage Delina, as a result of an attempt to cast a spell at an attacking gargoyle. The surge dispelled the petrification effect, returning Minsc and Boo to life. The pair joined up with the thieves Krydle and Shandie to battle the Cult of the Dragon.[9][8]

In the battle against Deniak, who had used his position in the Cult to perform a ritual in order to transform himself into a red dragon,[10] Boo's effective attack against Deniak's eye provided a significant advantage to Minsc, Delina, and their companions.[2]

Some time later, in Svardborg, Boo accidentally drank a potion of growth that had been dropped by Minsc, and temporarily grew to the size of a regular giant space hamster.[11]

In the Baldur's Gate series, Boo appears as an item in Minsc's inventory but if the player tries to remove him he scurries away and the protagonist receives a harsh glare from Minsc. He also features in Minsc's portrait in both Baldur's Gate I and II, but in the second game only his hamster squeaks are heard alongside Minsc's dialogue. 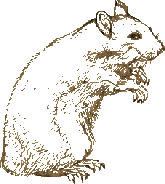 Boo as he appears in Baldur's Gate.