The Border Kingdoms occupy an area of lush grasslands between the Lake of Steam and the Shaar. This area is divided politically into many smaller principalities and kingdoms. Because of the instability of the Border Kingdoms, no accurate maps exist and the borders move around as rulers and boundaries change — this is the ideal place for adventurers wanting to start a kingdom of their own. A borderer is the name given to an inhabitant of the Border Kingdoms.,[2]

The region's most well known name, the "Border Kingdoms," was coined by sages in Sembia due to them being viewed as an obstacle to Calimshan's expansion and their ability to remain steadfast in the face of constant turmoil.[3]

The Border Kingdoms have a coastline to the west where they meet the Shining Sea. This coastline extends from the mouth of the River Scelptar in the south to the opening of the Lake of Steam in the north, at Theymarsh. The northern edge of the Border Kingdoms is bordered by the Lake of Steam and this natural border continues east for about 700 miles to the town of Alamontyr, the easternmost settlement. The border with the Shaar is not a definite one although it runs roughly southwest from Alamontyr back to the coastal rivermouth of the Scelptar.

The warm climate of the Border Kingdoms and the fertility of the low-lying grasslands mean that crops grow easily and food is never short. The winters are very mild compared with areas further north, and this combined with the abundance of food makes adventuring a popular pursuit. The excess food produced is traded with merchants from other places, especially Vilhon Reach, in exchange for trade goods.

“
The Border Kingdoms are the largest open-air sanitarium in all Faerûn–run by the madfolk, of course. Some nobles (aided by large and well-armed bands of retainers) even prefer the perilous entertainment of a ride through the Border realms to hunting jungle cats, stags, wyverns and beasts of the chase.
”
— Loremaster Hardolan Myrinter,
Musings of a Chessentan Scholar
Year of the Prince, 1357 DR[4]

Conflict is common in the Border Kingdoms. The Borderers have cause to fight the Calishite armies from the west, the invading nomads of the Shaar from the east and south, and also fighting between themselves over territory.

“
I toured the Border Kingdoms once. Dreary backwaters, my dear, all mud and rough unkempt types who wanted my money. I had to kill forty-two of them, and broke my best dagger in the eye socket of the most inconsiderately belligerent. Uncivilized louts—completely uncivilized!
”
— Lady Adreinelle Nesher of Waterdeep
Dowager Matron of House Nesher
Year of the Harp, 1355 DR[5]

The Border Kingdoms, as seen on the 3rd edition map of Faerûn. 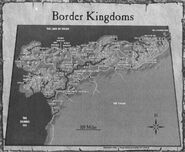