Deserts
Brass dragons were the weakest of the metallic dragons, and also one of the most benign of all species of dragon. They loved to talk, to the exclusion of most else. They loved to engage friends and foes alike in hours of long-winded conversation. It was not unusual for a brass dragon to be fluent in several hundred different languages, although they obviously preferred to converse in Draconic whenever possible.

Physically, the brass dragon was highly distinctive. From below, its outstretched wings formed a triangular shape, as they were attached to its body all the way to the tip of its tail. The wings were longest at the shoulder, and tapered gently as they reached the tail. Their scales seemed to radiate heat and light. As their name implied, brass dragons tended to have brass-colored scales. Their scales were a dull brown at a young age, becoming more glossy and brass-like in appearance as they aged. The shape of the head was quite unusual, as it included a large, curved plate that extended from the dragon's eyes and cheeks on either side and curved upwards into two points. They had two sharp horns on the chin, which became steadily pointier as the dragon aged. They smelled like metal.[6]

Brass dragons very rarely engaged in combat, preferring to talk rather than fight. If they considered a creature threatening, they would subdue it with their sleeping gas. In the face of true danger, a younger brass dragon would have most likely flown away and hidden in the sand. It would have fought and used its fire breath only as an absolute last resort. Older brass dragons preferred to avoid combat but would fight if they had the tactical advantage[7]

Brass dragons had two separate breath weapons. The first was a narrow line of fire, and the second was a cone of sleep gas.[5]

A stuffed young brass dragon was kept in the Obstacle Course level of Undermountain.[9]

Brass dragons were native to arid regions; they shared many similar habitats with blue dragons, which often led to conflict. The brass dragon preferred to dig its lair inside a desert peak or spire. They also preferred to have the bulk of their lairs face eastwards, so that the rising sun would warm the lair for the bulk of the day. A brass dragon's lair was well-constructed and quite extensive, with many twisting corridors and dead ends to confuse and discourage hostile intruders.[6] The centerpiece of any brass dragon's lair was the Grand Conversation Hall, where it spent the majority of its time entertaining friends and visitors. A typical lair also contained an elegant foyer, a gallery for the artwork the dragon collected, a sleeping chamber, and a storage room. All brass dragon lairs had several small entrances, known as bolt holes. These multiple entrances allowed a brass dragon to easily escape an attack by a blue dragon or other predator.[citation needed]

Brass dragon eggs were incubated in a nest of open flames. Incubation took approximately 480 days.[10] The eggs were typically tended by both parents, so that they could talk together as they maintained their vigil. The newly hatched brass wyrmling was not remarkable in appearance; its scales were a dull brown. The scales became lighter and more brilliant as the dragon matured. Brass wyrmlings probably learned to talk more quickly than the young of any other sapient species. They talked constantly about anything and everything, and they would talk to anybody: friends, family, enemies and small creatures that could not talk back, or even to itself if nobody else was near. When exposed to a new language, a brass wyrmling would usually become fluent in under an hour.[citation needed]

Adventures
The Rise of Tiamat • Waterdeep: Dungeon of the Mad Mage • The Orrery of the Wanderer
Board Games
Temple of Elemental Evil Board Game
Card Games
Magic: The Gathering (CLB) 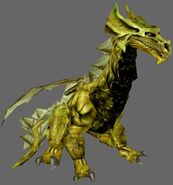 A Brass dragon as it would appear in the game editor of Neverwinter Nights. 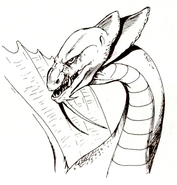 A brass dragon from 2nd edition.