Dark Sun Campaign Setting boxed set
Braxats were a nasty, brutish species that enjoyed tormenting their prey.[1] They were counted as scalykind by other Scaled Ones.[3]

Braxats were extremely muscular, even hulking, 15‑foot-tall (4.6‑meter) vaguely lizard-like humanoids with features that were a bizarre mix of spiny beetle and rhinoceros. The top of the head and the back were lined with thick, horn-covered plates and there was a single horn that jutted up between the nostrils.[1]

Braxats were violent and cruel people that enjoyed slowly torturing their prey to death before eating it. They feared no one and had no respect for law or authority. Unfortunately, they were also cunning creatures. They delighted in prolonging a kill and heightening fear by stalking their prey for long periods of time, using their telepathy to create false hopes, and crushing those hopes with ambushes.[1]

Braxats were had multiple abilities that made them more dangerous than their brutish appearance suggested. They had a breathe weapon in the form of a 30‑foot (9.1‑meter) cone of freezing cold, as well as having a few spell-like abilities, being able to replicate the effects of blink at will and confusion and feeblemind once each day.[1]

Much worse, however, was their natural psionic abilities. The most "benign" of these abilities was that they could speak telepathically to anyone within 1 mile (1,600 meters) of them. They could also unleash a 30‑foot-long (9.1‑meter) cone of mind-numbing mental energy in a single blast that could stun enemies. They were also known to use the mind thrust, mind blast, thought shield, and empty mind psionic abilities.[1]

Braxats hunted in groups called warbands. They preferred to soften potential prey up with their psionic abilities before entering melee, reserving their breathe weapon for use against any particularly tough or stubborn enemies. They did not wear armor, instead relying on their tough hide, but did use greatclubs as weapons.[1] 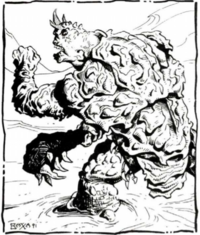 Braxats had a tribal society, with each tribe having between 20 and 80 members. Each tribe was led by a single leader, who proved they were worthy of leading annually in a ritual combat against a single challenger who had earned the right of contest over the past year through successful raids.[1]

Young braxats were taught to fight as soon as they could stand, and lethal combat between juvenles over food, lairs, and potential mates were not uncommon and even encouraged, since it meant that only the strongest and cleverest survived to reproduce. Eventually, a young braxat would prove themself worthy to join a warband, which then became like a second family to them. Agression between bandmates was strictly forbidden, and and killing a bandmate was punished with the immediate execution of both the offender and their family. This was because cooperation was deemed vital to a successful hunt. Switching between warbands occurred very, very rarely, typically only when most of a warband had been killed off.[1]

It was not uncommon for a single warband of braxats to wipe out several humanoid settlements during a single year. Survivors of their raids would sometimes band together to hunt them down in vengeance, and experienced adventurers were known to hunt them for sport, but braxats were more than capable of protecting themselves with traps and ambushes, and most such hunts ended in victory for the braxats. Those that succeeded yielded braxat-horn trophies, which had no value in and of themselves but could have intricate sculptures carved upon them by artists.[1]

Braxats typically spoke the Giant language, although more "civilized" ones made an effort to learn Common as well. Braxats were known to train as rangers, less commonly as barbarians or fighters, and very rarely as druids.[1]

Braxats were nocturnal and carnivorous creatures that preyed almost exclusively on intelligent humanoids. They lived in mountains and deserts in any climate. They were known to travel deep into civilized lands in search of plentiful and easy-to-catch prey.[1]