A burning man was a type of golem that appeared to be made of scorching coal.[1][2]

Burning man golems seemed to be covered in white-hot cinders and burning lumps of black-red coal. They radiated extreme heat, and were so hot to the touch that they caused some materials to ignite.[1][2]

Such golems were obedient to their masters, but only to the letter of their commands. They had an affinity for destroying and setting anything and everything alight, even their creators and immediate surroundings. Thus, there was great risk in making such a construct.[1][2]

Due to the large amount of heat radiated, burning man golems were only really used for combat. They used their powerful fists to assail their foes, which would also cause mass burning, and several other effects. Only weapons of a +2 magical enchantment or more would hurt these constructs, but they were also immune to fire, as well as lightning-based attacks. If their flames were extinguished, the golems could reignite themselves in a minute or so.[1][2]

The flaming constructs could regenerate health, but when they were reduced to their last, they turned to ash. However, the golems could slowly reform from their seemingly defeated state, unless the ash piles were covered in holy water, and then scattered.[1][2]

Some burning man golems were known to have taken residence in the mountains north of the Forest of Mir in Tethyr.[3]

To make such a construct, a huge man-shaped container had to first be made, and then loaded with pitch. The wizard had to employ difficult spells, such as flaming sphere and fire shield, as well as wish, geas, and animate object, as the last step of creation. This process took about three months, and approximately 60,000 gp, even for a very experienced wizard.[1][2]

The fearless burning man golems were first introduced for fighting against trolls. As trolls hated fire, these constructs would lay absolute waste to armies of them.[2] 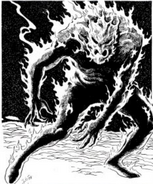 A burning man from Dragon magazine.
Add a photo to this gallery