Fighter
Caelar Argent, most commonly known as the Shining Lady, was an aasimar who led a crusade through the Sword Coast in the Year of the Banner, 1368 DR.[1]
“
You know my name. You know my cause. But you do not know my story. Mine is a noble family, blessed in every way. The Argents are destined for greatness, or so some think. I thought it myself once.
”
— Caelar, addressing the Shining Crusade.[1]

Thanks to her angelic heritage Caelar's eyes shone with a bright blue radiance.[1]

Caelar Argent was exceptionally charismatic and could inspire great deeds in her followers. While she was also capable of greatness, throughout her life she proved to be impetuous, uncompromising and exceedingly selfish.[1]

As an aasimar Caelar was resistant to the elements and magic. She could hurl bolts of divine energy at her foes.[1]

Caelar wielded a unique longsword called Aster's Edge and a shield called Solar Aegis. She wore the Mail of the Hallowed Hero and the Circlet of the Cynosure.[1]

Her uncle, Aun Argent was a valiant paladin in the Order of the Aster.[1]

She hailed from Waterdeep, where her family had ties with the Order of the Aster. Divine blood ran through the Argent family, though it was dormant for generations until Caelar was born. When she was nine years old, Caelar was tasked to watch over the order's library. While carrying out her duties, she succumbed to temptation and read aloud from the Tome of The Nine and became trapped in the Nine Hells by the baatezu Belhifet, and held within his domain in Avernus. Caelar's uncle Aun made an offer to Belhifet and traded his own soul in return for that of Caelar. She returned to the Realms, but her uncle remained in the hells.[1]

Caelar spent the next ten years secluded away from others, including those in her order. Having never forgotten her uncle's sacrifice, Caelar swore an oath to free him from Belhifet's clutches. To that end she contacted an individual known as Revered Brother Hephernaan, who shared with Caelar what he believed was necessary to enter into Avernus. They would require their own army to combat the hells' legions of devils, occupancy of the ruined Dragonspear Castle on the High Moor, and the blood of a divine being to unlock the portal buried within the castle's basement level. She set out to work on carrying out Hephernaan's requirements.[1]

As The Shining Lady[]

Caelar assumed the title of the Shining Lady and formed what she called the Shining Crusade, rallying forth all manner of folks from the Sword Coast, from mercenaries who fought mere for gold to disheartened veterans that suffered great loss during the first and second Dragonspear Wars. She brought on monstrous humanoids such as gnolls, half-orcs, and hobgoblins – individuals that may otherwise be shunned by the folks of the Realms. While she promised her followers a cause to which they could devote themselves, great riches and glory, and even the return of their deceased loved ones, in truth only Caelar started a campaign of conquest with one soul in mind. The Shining Lady marched her army north along the coast to Dragonspear Castle, raising villages conscripting more soldiers before finally taking occupancy within the ancient and haunted fortress. Upon their arrival Caelar and Hephernaan attempted to use her own half-divine blood to open the castle's portal but found it was not potent enough.[1]

Another opportunity presented itself in short time, when the Hero of Baldur's Gate Abdel Adrian was revealed to be one of the Bhaalspawn, a mortal child of the dead god Bhaal. She dispatched assassins to assail the hero while he stayed in the city, in a feeble and unsuccessful attempt to utilize his blood. The chaos caused by the crusade's campaign of acquisition along the coast sent refugees fleeing to many cities, spurring the Baldurian Council of Four to enlist Abdel and his companions to intervene and stop the Shining Lady. The adventurers and the crusaders fought a number of skirmishes as Caelar lured her quarry, along with the newly-formed Coalition forces, north across the Winding River at Boareskyr Bridge into a final confrontation at Dragonspear Castle.[1]

Unfortunately for the crusade, the combined coalition army of Baldur's Gate, Waterdeep, and Daggerford proved too mighty for the motley band of zealous warriors. Caelar's soldiers were forced back beyond the castle's courtyard, through the keep itself and into its basement; until the Shining Lady, Hephernaan, and a handful of her crusaders were holed away behind the magically-sealed doors that sealed away the vault in which the castle's infamous portal to the Nine Hells was set. Confronted by Abdel, his companions, and the leaders of the Coalition army, Caelar refused to surrender. Before anyone on either side could act, Hephernaan showed his true colors by magically holding everyone in place and used his dagger to spill the blood of the Bhaalspawn. The portal to the Nine Hells opened immediately and Caelar saw her opportunity to act.[1]

The Shining Lady and what remained of her crusade ventured through the hellscape of Avernus and marched upon the Basalt Tower. They lost many in this final push for Caelar's ultimate goal, confronting Belhifet and freeing her uncle from eternal damnation. Abdel Adrian and his fellow adventurers followed in short time, arriving at the roof of the tower just in time to witness Caelar's final loyal soldiers being struck down by Belhifet and the treacherous Hephernaan, who revealed himself as a minion of the powerful baatezu. Left entirely along with no allies at her side, Caelar Argent was presented with one final choice: give in and embrace the evil she had already exemplified during her deceitful crusade and submit as Belhifet's blackguard, or fight alongside the Hero of Baldur's Gate to defeat the ancient fiend, destroying it once and for all in its own realm. While Caelar's ultimate fate was unknown, legacy lived on with all the chaos and destruction her crusade had wrought. 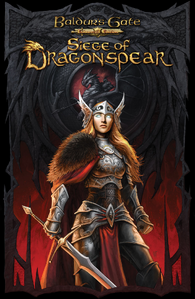