listen) was generally described as any humanoid creature that was half-fiend.[5]

“
Say, why does the baron cambion need a whole other name? Who does he think he is?
”
— Xanxost the blue slaad[6]

The exact meaning of the term "cambion" has differed over the years. Some sources stated a "true" cambion" was the union of a planetouched woman (usually a tiefling) and a tanar'ri.[7] They also further delineated this terminology to create "noble cambions": marquis and baron cambions were similarly sired by a demon lord father and a female humanoid half-fiend.[citation needed] After the Spellplague of 1385 DR, the terminology and usage of this term shifted to mean the union of a mortal female and a devil.[8] The offspring of a mortal male and a succubus was a different creature known as an alu-fiend.[9]

The mothers of true cambions always died in childbirth, serving to strand the newborn on the Material Plane, where it would be orphaned, or in the Abyss where it would be abused by the demons who looked down upon such children. Never accepted by either society, cambions invariably grew up bitter and twisted but, due to their powers, they often became exceptional assassins. Many though, were made ambassadors to the worshipers of various demonic powers, usually Graz'zt, Demogorgon, Orcus and Lolth.[7]

Loners by nature, they liked to get lost in the crowds of large cities, especially in places where people didn't ask questions. Good-aligned cambions were rare, but sometimes, if their mother was good- or neutral-aligned, they took on her non-evil nature and were subsequently doomed to a life of loneliness, as not even their demonic patrons would accept them.[7]

Cambions excelled in luring mortals to the Abyss; the only demons better at it were succubi. They then warned demons of the mortals' approach and let them do what they did best so the souls could be turned into larvae or manes.[7]

Cambions were very ambitious and always put as much effort as they could into whatever they attempted, maybe either to prove themselves to a parent or to themselves, but regardless, they made great leaders, information brokers, etc. and they were often catalysts for major events.[7]

Cambions bred true with each other, but they often preferred to seek out humanoid mates to create tiefling children.[7]

In 1st- and 2nd-edition Dungeons & Dragons, and by extension the Forgotten Realms, "cambion" was a term that meant the always-male offspring of a demon and a human female. In 3rd edition, it was a synonym for any humanoid half-fiend (according to the Monster Manual 3rd edition). The Expedition to the Demonweb Pits adventure threw in a third definition, claiming that a cambion was the child of a demon and a tiefling. Then, with 4th edition a fourth meaning was given: the child of a human and a devil. In the 5th Edition Monster Manual, cambions are simply the offspring of any variety of fiend with any humanoid. 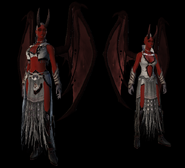 A pair of cambions from the Neverwinter Foundry

A cambion in Baldur's Gate 2.