50 gp
Carnelian, also known as sard, was a semi-precious stone found in the Realms.[5][6]

Carnelian was a variety of chalcedony that had a clear, orange[4] to red to reddish-brown hue. It was typically cut cabochon and polished to a glossy finish, but could also be tumbled to smooth, rounded stones. Because of its bright color, it was primarily used for jewelry and decoration. A typical specimen had a base value of 50 gp.[1][2][3][4]

This gemstone was used in the crafting of luckstones and in the creation of devices that offered protection from evil or from bodily harm. Carrying or wearing a carnelian generally improved the owner's luck by a small amount. A properly prepared and enchanted carnelian could be sacrificed in dire need to gain a second chance at some failed feat of strength, ability, or survival. The person had to immediately touch the special stone, which then disappeared in a flash of bright light, and try again.[6]

In the city of Mezro in Chult, some wizards crafted small enchanted carnelian stones, covered in countless magical runes. When the stone was put on one's tongue, it melted like elven candy, although it tasted heinous, like orcish goulash. This enchanted game gave the imbiber the ability to speak and understand the Tabaxi language for three days.[7]

Dreaming about, or having visions of carnelians was considered an omen of misfortune by many seers and oracles.[6] The stones were also sacred to the churches of Bane, Erevan Ilesere, Gaerdal Ironhand, and Haela Brightaxe.[8]

The Heart of the Lion was a huge specimen and a holy relic of Hajama in the land of Zakhara.[9] 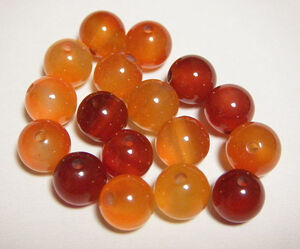